A senior Airbus Helicopters official has confirmed that the European manufacturer’s proposal for Defence’s Land 4503 (replacement Armed Reconnaissance Helicopter, ARH) will include upgrading the current Tiger ARH fleet, together with a number of H145M armed light helicopters.

Speaking at the Airbus Trade Media Briefing in Germany on Monday, Airbus Helicopters Defence Programs executive vice president Matthieu Louvot said the proposal will involve a number of H145Ms – understood to be seven – to provide an additional ARH capability and to maintain a capability while the Tigers cycle through the upgrade program.

The Tiger ARH upgrade proposal would use technologies developed for the French/German Tiger Mk III program.

The Tiger Mk III program is now the subject of de-risking activities, prior to the selection of a definitive configuration, but will likely involve a significant enhancement of the existing helicopter’s avionics system, for which the Thales FlytX system developed for the H160 helicopter is being considered, together with new mission systems and enhanced and additional sensors.

Service entry is expected in the late 2020s and Louvot confirmed that Airbus is proposing to extend the life of Australia’s Tigers out to at least 2040.

He said the H145Ms offered for Land 4503 would be in addition to Airbus Helicopter’s bid for Army’s special operations support helicopter program being delivered under Land 2097 Phase 4. The Commonwealth requirement for that program is for sufficient helicopters to maintain 16 on line at any given time and to enter service in 2022.

The H145M is capable of employing weapons, including 12.7 mm machine guns, 20mm cannon pods and the potential for a range of air to ground and air to air weapons. Up to four helicopters can be carried aboard a C-17A Globemaster transport aircraft. 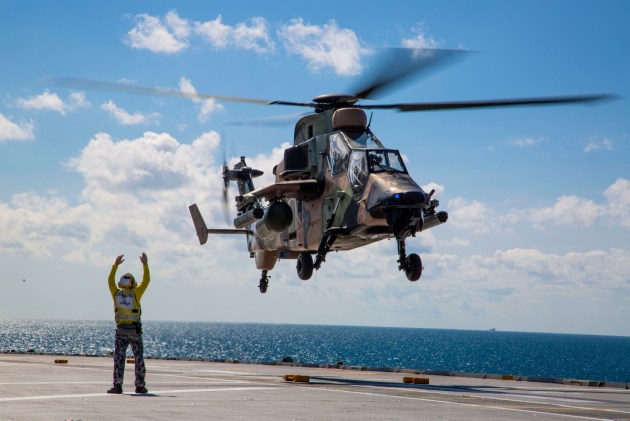 “The Tiger upgrade and H145M together will provide enhanced capabilities and will cost three billion Australian dollars less than buying a new helicopter type,” Louvot said.

Disclaimer: The writer travelled to Germany as a guest of Airbus Defence and Space.