Given the wide range of assets the RAAF has in play and the limited exercise time they have with international partners, it literally pays to make the most of this training time. EX Black Skies is the simulation effort run by DST Group with industry support to help get RAAF crews ready for EX Pitch Black.

“In the short term what we try and do is provide Air Force operators who are about to go off to Exercise Pitch Black in the Northern Territory with a valid mission rehearsal,” Dr Chris Best, DST Group’s Science Team Leader for Exercise Black Skies explained to ADM.

The exercise was the first real workout for the RAAF’s new Joint Air Warfare Battle Laboratory (JAWBL) as part of the new Air Warfare Centre but Black Skies has been running since 2008 for various parts of the RAAF. The constant users have been the RAAF’s air defence ground environment community, while the Wedgetail, Hornet, Army (with JTACs) and Special Forces communities have also been involved with several Black Skies exercises.

“Practicing the scenarios in this environment means that operators can go into live exercises much better prepared and get more out of them.”

When Black Skies started, Air Force didn’t have a lot of experience in terms of mission rehearsal and the relative value of that,” Dr Simon Parker DST Group’s Head of the Air Operations Simulation Centre said to ADM.

“So one of the things Chris has been able to demonstrate, by following participants through to the live exercise and measuring the impact, is that the mission rehearsal actually plays a valuable role in preparing people for live exercises. So over the years the participation has been easier to get and has become more involved through to the point where Air Force headquarters decided that they actually wanted a capability where they could conduct Black Skies on the base at Newcastle. This led to the Air Force minor project, which led to us being able to build JAWBL, which led to Black Skies being conducted on base this year.”

2016 saw the air defence ground environment and the Wedgetail involved primarily as a command and control focused exercise with teams of between 7-9 operators as the training audience.

“All scenarios were really tailored quite carefully for the objectives that those two groups had for the live exercise, Pitch Black. And in support of that there was a large body of people – engineering support and white force support to make all that happen.”

Industry support came from a number of companies including Milskil, SimSol, Daronmont, CAE, and Boeing, who made up a large part of the so-called ‘White Force’ team (those who run the exercise, as opposed to the training audience). Milskil focused on the design and coordination of the exercise scenarios, Boeing provided support to the Wedgetail simulation, while SimSol, CAE, and Daronmont provided software and systems development support.

“The key to its success has been the way we’ve been able to balance the necessity to provide the operators with a valid mission rehearsal environment and also the environment we need to do some research in support of longer term Air Force objectives,” Dr Best said. “That’s a pretty important aspect of Black Skies and it’s something we work really hard on.

"It’s achieving some research objectives that help Air Force to understand over the longer term how to develop and get the best out of these kinds of systems, but also in the short term provide a really good experience for the individuals who come along.”

This thinking was echoed by SimSol’s Director of Innovation Jon Blacklock who said the complexity of the battle management coordination role can be demonstrated synthetically much more efficiently in a lab than in the real world.

“Many of these exercises [like Pitch Black] are mission focused rather than outcome focused,” he said to ADM. “This means that you don’t get the chance to practice all the skills you would need in a real world operational environment. Practicing the scenarios in this environment means that operators can go into live exercises much better prepared and get more out of them.”

One of the key tools that was trialled by DST Group with support from SimSol during the exercise was the ‘DST Group Assessment and Review Research Tool’ (DARRT). Developed by both SimSol and DST Group, DARRT allows trainers on the white force to watch the action in real time and ‘bookmark’ instances where the action was not ideal, needed clarification or feedback. It records every feed in the exercise to replay and debrief. Did the trainee have their console configured properly? Were the sensors pointed the right way? What was your thinking behind taking that action? All of these elements can be effectively debriefed after the mission scenario is complete.

Dr Best was enthusiastic about the capability and the promise of this tool.

“This kind of thing is going to be really interesting and important as the scenarios that are simulated in these kinds of exercises are fairly complex. When you think about how to get the best out of those scenarios in terms of learning, what really matters is that the important events are identified and the lessons learned are pulled out of those events,” Dr Best said. “With complex scenarios there’s no guarantee that the right people will be looking at the right things at the right time, but what we’re really interested in is looking at smarter systems to help alert people to when those important events take place and to orient their attention to the right lessons.”

Simlink provides a synthetic link to all Link 16 feeds from a range of assets into a single feed. In the past, each platform or asset (real, simulated or stimulated) using Link 16 had to have its own plug-in to the wider simulated environment. SimLink does it all in one program. While Simlink is part of the wider JAWBL toolset is was not used as part of Black Skies this year.

SimSol’s RadioActive tool also formed part of the JAWBL system. RadioActive is a synthetic voice tool allowing all voice feeds such as various radios, satcoms etc to be patched into the wider system. This system is already in place at training sites at RAAF East Sale and Williamtown.

And Black Skies is just the beginning for JAWBL and the wider DST Group and industry team.

“In parallel with this, we’ve been responsible for getting Air Force linked in to Coalition Virtual Flag,” Dr Parker said. “So there are other places like the Air Mobility Group at Richmond that helped oversee the C-130J simulator for Virtual Red Flag. And there are other Air Force simulators that you would expect in the near future to be rolled into the next one.”

RAAF as the customer in this case has been very pleased with the results of the exercise this year. 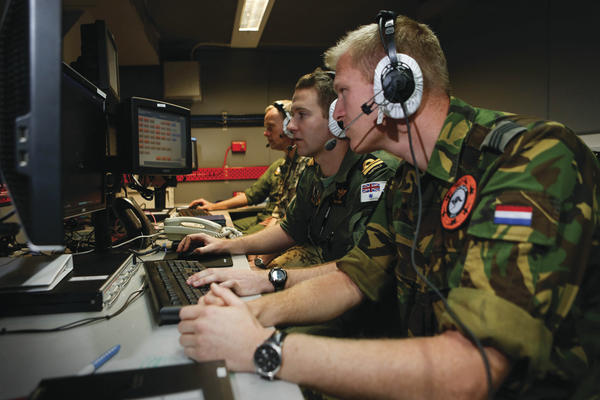 Getting the most out of international exercises is key. Credit: Defence

“A good example is one of the senior members of the RAAF contingent in Black Skies 16 who said at the end of the exercise that the teams were performing at a level that would be typical of Week 2 or 3 of a live exercise,” Dr Best said. “So thanks to an intensive week of a well-designed simulation exercise we’ve been able to bring those operators up to a level that they wouldn’t necessarily be at when they arrived at the live exercise a few weeks from now.”

As Black Skies has been running since 2008, the DST Group team has been able to track the performance of those operators who have attended Black Skies versus those who haven’t.

“What we were able to demonstrate to the Air Force was that there was a clear performance benefit in a live exercise like Pitch Black for those people who had done the simulation exercise previously,” Dr Best said.

Both industry and DST Group are happy to see the technology move from a lab environment out into the real world.

The Black Skies team, both Defence and industry members, hope that the systems and tools developed for the RAAF will also be adopted by the other services and their coalition partners as a common set of applications that make simulation affordable and integral to Defence capability.

“From lab to live,” Dr Parker explained to ADM as he spoke of the collaborative environment that Black Skies and indeed JAWBL have brought into this space.

“We get a buzz out of seeing science turned into something that’s useful for the operational community,” Dr Parker enthused.