Once regarded as the poor relation in Defence acquisition expenditure, Army is now benefitting, or preparing to benefit, from a series of programs that will dramatically enhance capability in the Land domain.

Given the importance of mobility to combat power, much of this modernisation flows from investment of $25 billion in armoured, protected and unprotected vehicle fleets.

And central to these acquisitions is Army’s restructure under Plan Beersheba from light infantry, motorised and mechanised brigades to three similarly-configured combined arms, multi-role manoeuvre brigades.

“The combination of vehicles produces both a far more capable brigade effect – the combat power is greater - and situational awareness, with the capacity to reach out and influence, and to detect and be aware,” stated Lieutenant-General Campbell.

“It is a far more sophisticated brigade. It means we can operate, and need to operate, with more dispersed functions that are interconnected and can reach out and touch our adversaries at far greater distances.”

Project Land 121, the provision of new light, medium and heavy vehicles, many protected, is already delivering capability under two phases, as is the digitalisation of army radios and the rollout across Army of the Elbit battle management system (BMS) under Project Land 75.

Delivery under Land 121 Phase 3A of some 2,146 4x4 and 6x6 unprotected Mercedes Benz G-Wagons was completed in 2016. These are replacing two-thirds of Army’s Landrover fleet, and some have already been deployed to Fiji on disaster relief work, and to Hawaii on exercises.

Defence says the type would also be capable of being deployed on operations, but only wthin a secure environment with the Hawkei Protected Mobility Vehicle (PMV-L) to be utilised in more dangerous areas.

The balance of the Landrover fleet will be replaced under Land 121 Phase 4 by 1,100 Hawkei through a $1.3 billion contract with Thales Australia. A separate contract change was also executed to incorporate the first four years of Hawkei support into the Bushmaster support contract with Thales.

Two Hawkei prototypes – one two-door and one four door variant – successfully passed crew survivability blast tests in April at the Joint Proof and Experimental Unit at Graytown in Victoria.

Sarah Myers, Assistant Secretary Land Vehicle Systems, told ADM that following the blast tests and the completion of reliability trials, production in Bendigo of 100 vehicles was expected to get underway later this year. Full rate production would begin in 2018, with Initial Operational Capability (IOC) expected in 2019 and Full Operational Capability (FOC) anticipated in 2023.

Hawkei also boasts a built-in Integral Computing System (ICS) that allows information from numerous disparate systems to be presented on a common screen, something not previously available on any Army vehicle.

Delivery to army units of the initial variants of a total of 2,707 protected and unprotected medium and heavy vehicles, 3,858 modules and 1,704 trailers to replace Unimog, Mack and S-Liner fleets began in February.

Land 121 Phase 3B is acquiring 2,536 trucks and 3,858 modules from Rheinmetall MAN. The trailers are being constructed by Queensland company Haulmark. The project is also acquiring a further 171 vehicles (G-Wagons and PMVs) and 49 PMV trailers. 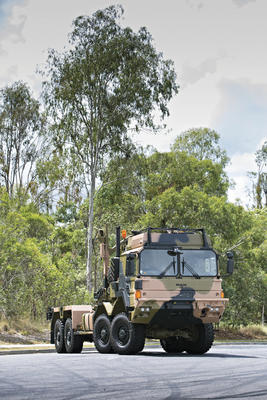 Costing around $1.7 billion, the Rheinmetall MAN vehicles under Land 121 Phase 2B at a cost of $3.46 billion, the vehicles are being delivered in monthly batches of 60-70 vehicles with a mix of protected and unprotected cabins, Myers said. Final vehicle deliveries are expected in 2019.

According to informed sources, well over 40 per cent of the vehicles will be protected.

“The new vehicles have got air-conditioning, the Macks and Unimogs don’t, and that is one simple enhancement that will make soldiers’ lives a lot easier, ” Myers said.

The new platforms are fitted for but not with the BMS, she said. She also confirmed that mounts for self-protection systems were not included in the scope of the 3B project, and would require an engineering study to progress.

Stressing the benefits of the integrated load handling system, Brigadier Haydn Kohl, Director General Land Manoeuvre Systems in the Capability Acquisition and Sustainment Group (CASG), noted it would allow a load to be dropped and another picked up in less than 10 minutes compared to the usual several hours; if necessary, without the driver leaving the cabin.

“It gives us the flexibility we haven’t had before,” he commented.

The source of much of Army’s combat effectiveness over several decades will be determined by the outcome of Risk Mitigation Activities (RMA) in which the BAE Systems-Patria Armoured Modular Vehicle (AMV35) is competing against Rheinmetall Defence’s Boxer multirole armoured vehicle for Land 400 Ph 2. This will provide 225 Combat Reconnaissance Vehicles (CRV) to replace the ageing fleet of 257 ASLAV light armoured vehicles.

The RMA will be completed on 11 August 2017, shortly after two different blast tests on a single example of each contender’s platforms. Revised tenders are due to the Commonwealth by then, and a decision is expected by the second quarter of 2018, or earlier.

Subsequently, Land 400 Phase 3 will see the acquisition of 450 Infantry Fighting Vehicles (AFVs) backed by 17 manoeuvre support vehicles to meet Army’s mounted close combat requirements.. These will replace 431 upgraded but obsolescent M113AS4 armoured personnel carriers, 140 of which are in storage.

According to a Request for Information (RfI) which closed in March 2016, the ideal solution would be a tracked and turreted IFV with high levels of protection, mobility commensurate with the M1A1 Abrams, and the ability to lift an eight-strong infantry section.

Second pass is forecast for 2020/21 although this could come earlier, given reports of Commonwealth interest in fast execution following a decision on the CRV and possible elements of commonality between the two types.

Meanwhile the capability of the 59 MIA1s, already enhanced with selected elements of the Tank Urban Survivability kit (TUSK), is undergoing a $58 million mid-life technical refresh at Defence’s Bandiana facility. The refresh includes temporary removal of the turret, component replacement, and an upgraded suspension.

A major upgrade under Project Land 907 Phase 2 – included in the Integrated Investment Plan – is intended to maintain the MIA1’s effectiveness and lethality against evolving threats. 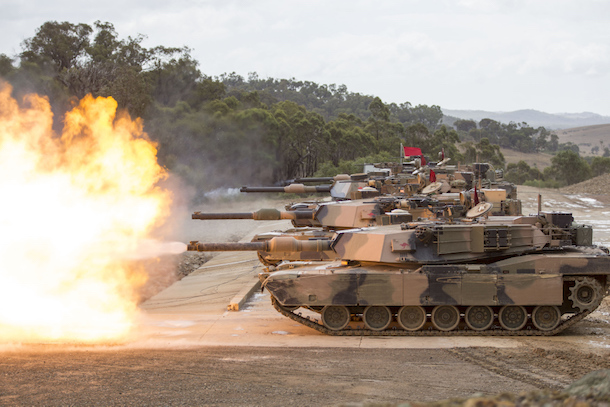 Work is underway to determine the effect that would be provided by the MIA2 variants compared to Army’s requirements and the intention to extend the service life of the Abrams fleet out to 2035, BRIG Kohl disclosed.

Colonel Doug Mallett, Director for Combat Support within CASG, said the composition of the future C-RAM (Counter Rocket and Mortar) capability within NASAMS had yet to be determined.

“Whether we continue with the present sense and warn capability or choose to also have a hard kill effector is part of the first Second Pass journey we’re about to go through.”

COL Mallett disclosed CEA had been tasked with producing a tactical active phased radar capable of being deployed on a Hawkei. Using a Hawkei as a potential platform for the system’s missile launchers would also be considered, he said.

Meanwhile the rollout of the EF88 5.56mm rifle continues, with about 7,000 of the rifles and 600 integrated grenade launchers issued to units in North Queensland, according to Malcolm McKeith, Director of Armaments Systems Program Office.

Units in South Queensland will begin receiving the weapons in July, followed by delivery to units in the rest of the country based on Army priorities.

Under Project Land 125 Phase 3C, some 30,000 EF88s (E for Enhanced) are replacing the Austeyr F88 which, with various modifications, has been in service with the ADF since 1988.