The German bidder for the Sea 1000 Future Submarine has said a propeller is the only suitable propulsion type for a conventional submarine, arguing that pump jet propulsion only makes sense for nuclear submarines which can afford to transit at high speeds for long periods of time.

TKMS also revealed the latest Type 212 submarines in service with the German Navy feature a radical new lightweight composite carbon fibre propeller as an alternative to the traditional bronze alloy type currently in use by most conventional and some nuclear submarines.

TKMS Australia CEO and ex Collins class skipper Philip Stanford said US Navy graphs comparing the efficiencies of the two propulsion types demonstrated that propellers were more beneficial for conventional designs, which did not operate in the high speed realm very often.

“So right when you are going for the maximum time between snorts while on station and operational, you’d be less efficient because you’re dragging that thing through the water.”

“If a conventional submarine was travelling at speeds of greater than six knots when on station you’ve got to ask why because you’ve always got to conserve energy, meaning battery power.

“If you can be doing two or three knots, that’s much better, once you get above double digits or the high teens, that’s only when the pump jet starts to deliver greater efficiencies." 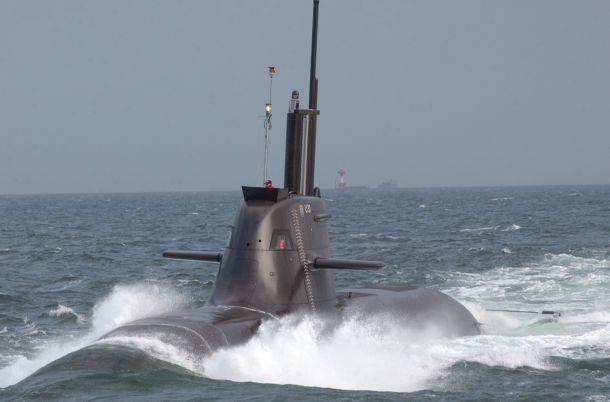 The Type 212 is the mainstay of the Bundesmarine submarine force, and the latest batch 2 variants are fitted with the new carbon composite propellers. Credit: TKMS

During the long transits required by Australian submarines, Stanford said that average transit speeds were about 10 knots, with sprints moderately faster interspersed with much slower snorkel speeds at periscope depth.

“But when you’re on station, and you’re there for six weeks, if you’re ever doing more than four knots, there’s something wrong,” Stanford said.

“When you’re actually doing the job, you're at walking speed – this is how you spend most of your time so you want the most efficient system you can get for that kind of profile.”

Campaign Manager TKMS Australia Manfred Klein said with nuclear boats it makes much more sense to have the pump jet propulsor because of the power they are able to put through the water but with conventional boats “we’re not talking about 25 megawatts”.

“We optimise our boats to the point where we want to operate them and this is not high speed transits,” Klein said.

Stanford said that at the slower speeds preferred by conventional submarines, the propulsor actually caused too much drag.

“So right when you are going for the maximum time between snorts while on station and operational, you’d be less efficient because you’re dragging that thing through the water.”

The German shipbuilder has also put an alternative to the bronze alloy propeller into service on the German Navy’s latest Type 212 submarines, U-35 and U-36.

The lighter composite carbon fibre propeller, developed by the TKMS composite structures R&D team using high precision digital manufacturing techniques, is lighter, as durable as the bronze alloy and offers the massive benefit of only having to replace single blades in the event of damage.

If a bronze alloy propeller is damaged, the whole propeller must be replaced at significant expense in terms of cost and time.

Stanford said this was unrivalled technology in submarine manufacture and a propeller of this type reduced the target echo strength to another submarine attempting to detect it from the rear.

“When you’ve got someone transmitting from behind, you haven’t got a big metal propeller reflecting, or indeed a pump jet, so this improves target echo strength in your favour,” Stanford said.

Note: ADM’s Patrick Durrant is currently in Germany as a guest of TKMS.