YTEK founder and CEO Richard Yanieri has worked with and developed some of the world’s most advanced modelling and simulation technology, including computational intelligence (CI) systems capable of “learning” as they go.

But far from advocating wholesale application of technology to any given training scenario, Yanieri holds that technology is most effective when it augments human decision-making rather than trying to replace it. To paraphrase Winston Churchill’s wartime quote on scientists, it should be “on tap, but not on top”.

“Our goal from the outset has been to show the value of CI through a proof of concept.”

“Human-machine integration problems are complex and sometimes intractable,” Yanieri explained to ADM. “We have to respect the possibility that more technology may not always be an advantage. But sensitively leveraged CI can be.”

CI is the ability of a system to learn a task, heuristically or in a nature-inspired way, by observation of data, to make predictions or suggest an action based on previous “experience”. At its most basic it ensures that looking at cars on the internet virtually guarantees the appearance of car-related advertising for the rest of the browsing session. In higher applications it adds experiential data gained “on the fly” to the cloud of data points informing future decisions in fields as diverse as surveillance and reconnaissance, bio-medicine and autonomous driving cars.

And, in the hands of YTEK’s scientists and engineers, CI has the power to vastly increase both the useful data gained from managing any kind of real or simulated scenario and the efficiency with which the lessons and supporting data it generates can be clearly articulated in any after action review (AAR) or training debrief.

The company has followed a well-trodden development path, from services to product distribution and support of world-renowned packages such as the MASA SWORD war-gaming product and DIGINEXT’s DirectCGF battlespace simulation solution.

But since 2009 YTEK has poured around 12 per cent of annual revenue into research and development of its own new concepts and products, focusing on automation though the use of CI.

And after seven years of patient research and development, the company is close to another great milestone, entering the final development phase of what it believes will be a core product with a multitude of applications across both civil and defence markets.

ExTrace is a new automatic After Action Review product, designed to simplify a training review task by automatically analysing sensor and trainee action data on the fly and reporting automatically in whatever way is most useful to an instructor. 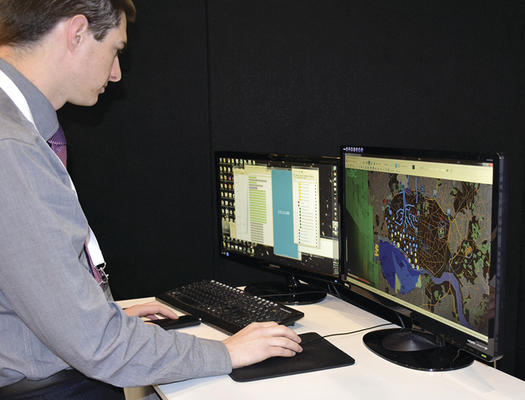 YTEK has provided world-renowned battlespace training and After Action Review systems, such as MASA SWORD, but is now developing its own products. Credit: YTEK

Developed in collaboration with Deakin University’s Institute for Intelligent Systems Research & Innovation (IISRI) and School of Medicine (SOM), ExTrace has been a live project since 2009, attracting funding support from both the Australian Research Council (ARC) Linkage program and more recently the Science and Industry Endowment Fund through CSIRO's SME Connect.

“We crawled first, then we started to walk,” Yanieri said. “When we started this work in 2009 we found no such products existed. Investigations into the human factors (HF) and socio-technical aspects behind training review led us to discover the potential of CI to assist trainees and instructors alike, plus course designers and training enterprise administrators.”

ExTrace applies the concept of event trajectory analysis. Put simply, it means a trainee’s actions, their timing, and logical relationships will be analysed against what is considered an “ideal performance trajectory” of whatever exercise or task is encoded in the system’s database. A local subject matter expert will be able to define how the key points of the analysis are defined and presented, without resorting to any form of technical support. It has the potential to improve training outcomes by lowering the “cognitive load” on trainers and trainees, and to save cost by allowing training with a lower expertise instructor, or even self-training by the student with automated feedback.

“We identified the opportunity to potentially save time and effort and assist instructors in making swift, repeatable, auditable and objective performance analyses, rather than rely on manual and cognitively demanding assessment and inefficient, subjective and localised techniques,” Yanieri said.

“It’s simply about the appropriate application of CI to reduce human operator overhead and to create cognitive headroom for quicker, more insightful training reviews. For example, we know that in training the delay between performance and performance review is critical to the training outcome. Enter machine speed and automation, in a trustworthy dose.”

ExTrace is at a high technology readiness level, with a system prototype ready to be validated in an operational environment at Deakin’s SOM. But the system that trains medical staff today could potentially train ADF staff tomorrow, and even provide decision management support for battlefield planners.

“Our goal from the outset has been to show the value of CI through a proof of concept, and then to expand the number of applications,” Yanieri said. “We have now demonstrated the benefits of our automated AAR, ExTrace, in a clinical setting where timely and accurate debriefing is essential. We plan to apply the technology in simulation-rich Defence training, in spaces such as air battle management and advanced combat staff training, which is where we see a real and growing need.”

Yanieri’s vision for YTEK was always to use its cognitive augmentation expertise to improve the productivity of training reviews, through new levels of trusted automation. With YTEK now in the final stages of a long journey from service provider to product developer and building its own intellectual property, the vision is becoming a reality.