Navy has responded to questions it took on notice during the May Budget Senate Estimates hearing, revealing trials it was conducting to test the suitability of the LHDs’ landing craft for carriage of Army's main battle tank, the M1A1 Abrams, have been suspended.

The tabled answer to Senator Gallacher's numerous questions on the topic stated that the trial was suspended because the LCM-1E landing craft “sat lower in the water than was predicted” when the 57 tonne MBT was embarked. The maximum load carriage capacity of the LCM-1E in benign weather conditions is 65 tonnes, decreasing to 38.9 tonnes in Sea State 4 (moderate, wave height from 1.25 to 2.5 metres). Interestingly, Navy stated further test and evaluation activities may change these figures.

The LHD landing craft sat lower in the water than expected

Currently the only method of transporting the tanks ashore are via the two Mexeflotes carried by HMAS Choules. The motorised landing raft system has a maximum load carriage capacity of 120 tonnes and was used during the recent Talisman Sabre exercise to ferry at least one M1A1 ashore. Navy said the mexeflotes had been tested for compatibility with the stern ramp of the LHDs and had proved suitable. 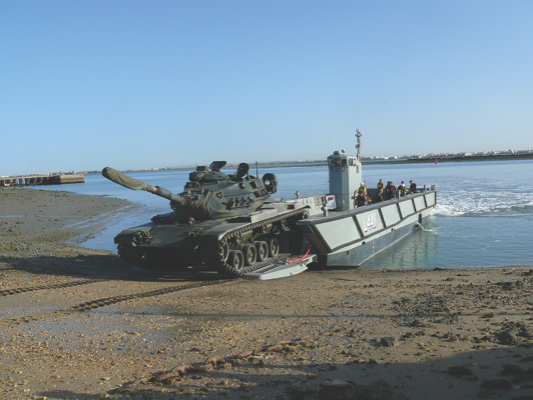 An LCM-1E conducts a landing trial with a 50 tonne Spanish M-60 MBT in Cadiz Harbour in 2015. Credit: Navantia

Navy plans to conduct another M1A1/LCM-1E trial following further analysis but for the meantime, the deployability of Army's tanks in an amphibious task force is reliant upon the presence of HMAS Choules. The submission ended with this statement: “if a vehicle, through test and evaluation, is unable to be embarked in the LHD, then further options will be developed to overcome the issues”.