Pathfinder, which according to the company is the world’s first air-deployable UGV system, will appear alongside its larger multi-role stable-mate, MAPS (Mission Adaptable Platform System), which is currently contracted to the ADF and under evaluation. Praesidium Global demonstrated a UGV at the Army Innovation Day 2016.

Pathfinder carries two UGV’s housed in a deployment kennel that is inserted into an operational area using a GPS-guided precision delivery parachute. Once Pathfinder reaches its target area the vehicles are deployed and controlled from an orbiting aircraft as they confirm conditions on the ground.

“Pathfinder is effectively a Mars Rover unit for airborne and Special Forces,” Praesidium Global managing director David Baird said. “It enables a team in an aircraft to answer questions about an objective that can’t be determined from overhead ISR assets. Once the team is on the ground they can control the UGV from the kennel to scout ahead of them, or provide over-watch as they go about their mission.”

The MAPS unit is a medium sized semi-autonomous UGV capable of supporting a variety of missions. 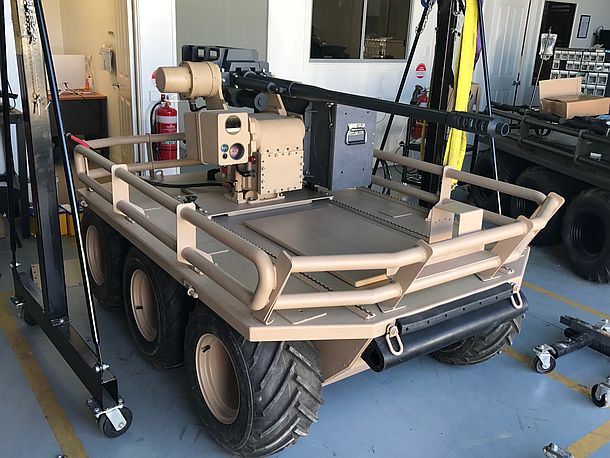 Praesidium Global are attending DSEI as part of the Team Defence Australia delegation.