A record 45 Australian defence industry companies are being showcased at the Defence and Security Equipment International exhibition (DSEI) in London as part of the Centre for Defence Industry Capability’s Team Defence Australia (TDA) delegation.

Defence Industry Minister Christopher Pyne said an additional five businesses were exhibiting independently at the event which runs from 12-15 September and is expected to attract over 34,000 attendees.

“This is the largest Australian delegation at an overseas trade event on record,” Minister Pyne said. “It reinforces the range of internationally competitive capabilities Australia’s innovative small to medium sized companies possess.”

The Australian delegation at DSEI consists of over 115 representatives from industry, State and Territory governments, the Department of Defence and the CDIC, which manages the TDA program on behalf of Defence.

Minister Pyne said mature exporters and businesses new to exporting would be exhibited on the Australian stand to showcase their products to foreign defence forces and defence companies from around the world.

“Australia’s defence industry has world leading technologies, capabilities and services that are in demand by our allies and international partners ... [and] DSEI is a perfect opportunity to showcase what Australian industry has to offer.”

Of course many overseas primes and SMEs are also exhibiting their wares at the event, some of them in the process of competitive evaluation for Australian projects. BAE Systems had a display of numerous synchronised small UAS buzzing about and were also spruiking the Type 26, now in production and under consideration for Sea 5000 as the Global Combat Ship. Rheinmetall was sporting a Boxer CRV in union flag livery with no small nod to Austin Powers; the vehicle is also a contender for the UK's Mechanised Infantry Vehicle (MIV) program.

The UK was an early partner in the development of the Boxer CRV, hence the moniker ‘British by Birth’. Credit: Rheinmetall

Unmanned Ground Vehicles made a big appearance at the show, some tracked, some wheeled and others air-deployable. Queensland SME Praesidium Global is exhibiting an example of the latter, named the Pathfinder, two of which can be housed in a deployment kennel that is inserted into an operational area using a GPS-guided precision delivery parachute. 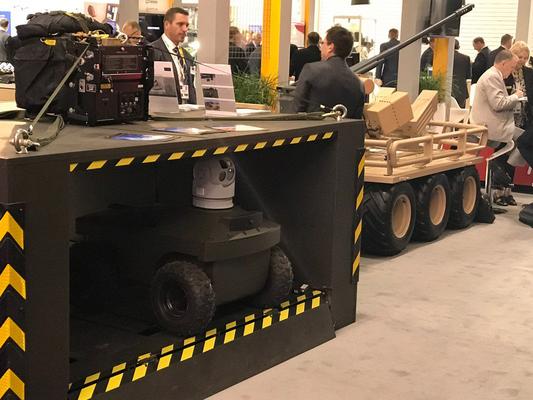 A list of the TDA exhibitors can be found here.