An upgrade to the AEGIS combat system of the RAN's Air Warfare Destroyers (AWDs) referenced in the 2017-18 budget papers suggests planning is underway to provide the three ships with a Ballistic Missile Defence (BMD) capability.

Given concerns about North Korea’s strategic missile program and the introduction by China of the Dong Feng-21D “carrier killer” anti-ship ballistic missile said to be able to hit a moving target, this should come as no surprise.

Although the Integrated Investment Plan (IIP) includes a $4-5 billion provision for upgrades to the AWD combat system between 2017 and 2028, it says nothing about what the upgrades will involve.

Likewise, the 2017-18 Defence Portfolio Budget Statements disclose that first pass approval will be sought for Project Sea 4000 Phase 6 Aegis Capability Upgrade in 2017-18, but it too provides no additional information.

However, the intention to equip the AWDs with the SM-6 long range missile to enhance their capability “against emerging air threats” was explicitly confirmed in both the 2009 and 2012 Defence Capability Plans. This was to have occurred under Project Sea 1360 Phase 1, which now appears to have been absorbed within the wider Sea 4000 Phase 6 undertaking.

For its part, the 2016 Defence White Paper states simply that the AWDs will be equipped with "new advanced surface to air missiles” by the middle of the next decade.

The only credible candidate remains the SM-6, and to deploy this on the AWDs will require the command and control element of their Aegis systems to be upgraded to the latest Baseline 9.0 configuration.

The Baseline 8.0 Aegis systems with which the AWDs will enter service - the first Aegis configuration to incorporate an open architecture computing environment – were ordered in 2006 and produced in 2009. Each system languished in storage for several years before testing and integration into its host vessel and is no longer state-of-the-art.

Given the SM-6 requirement, the designation by the USN of Baseline 9.0 as the foundation for all future Aegis upgrades and the RAN’s desire to maintain system commonality with the US, the only question would seem to be not if, but when such an upgrade will take place.

Any vessel with Aegis Baseline 9.0 can be given a BMD capability via an optional module. Previous Aegis baselines require a parallel BMD capability that is integrated separately.

Taking into account the expense and time that would be involved in moving to the latest configuration, a decision to upgrade without including the BMD element would seem unlikely.

Both configurations incorporate a multi-mission signal processor that allows the ships to simultaneously track and target both aircraft and ballistic missiles. Earlier baselines handle only one of these missions at a time, a limitation that has required non-upgraded Arleigh Burkes to operate in pairs on some operations.

The Aegis system of the third and final AWD could conceivably have been upgraded to the 9.C1 configuration prior to the ship’s delivery to the RAN in early 2020. However, as of early June Ship Three was 60 per cent complete and combat system elements had already been installed.

The AWDs will therefore enter service equipped with the 169km range SM-2 Block IIIB anti-air missile. This is also effective against sea-skimming anti-ship cruise missiles and has a limited utility against surface targets, but it has no BMD capability.

The USN’s current standard exo-atmospheric ballistic missile interceptor is the SM-3, equipping the Arleigh Burke-class and several Ticonderoga-class cruisers. The missile is also deployed on two Japanese Maritime Self-Defence Force Atago-class and four Kongo-class destroyers and is to be deployed on three South Korean new-build Sejong the Great destroyers.

Since the first SM-2 was deployed by the USN in 1981 the type has undergone a series of upgrades as well as its evolution into the SM-3 with its LEAP (Lightweight Exo-Atmospheric Projectile) manoeuvring kinetic hit-to-kill warhead for defence against short to medium range (1,000-3,000 km) ballistic missiles in the midcourse phase of flight.

Manufacturer Raytheon says the SM-3’s kinetic impact on a target equals that of a 10-tonne truck travelling at 600 mph.

The SM-3 Block IA has a range of about 700km, travels at more than Mach 10, and entered service with the USN in 2006. The more capable Block 1B was commissioned in 2014 and locates its target via a mix of GPS/INS data, midcourse guidance from the launching ship, and its own infrared homing sensors.

The Block IIA, a co-development between the US and Japan, features an improved seeker, a range of 2,500km, travels at more than Mach 15, and is scheduled to enter service in 2018.

Its ability to engage distant targets above the atmosphere means the SM-3 can defend large areas, although its cost of around $12.5 million per copy renders it unlikely to be fired in salvo.

Enter the SM-6, a development that combines missile propulsion, airframe and ordnance from the limited-production BMD-capable SM-2 Block IV, and features an enlarged version of the active radar seeker on the Advanced Medium Range Air-to-Air Missile (AMRAAM) in service with the RAAF.

Not only is the SM-6 more affordable at around $5 million each; the missile is capable of over-the-horizon engagement of enemy aircraft and cruise missiles using networked targeting information while the SM-6 Dual 1 upgrade adds a new, more powerful processor and sophisticated targeting software to also provide a proven in-atmosphere ballistic missile defence.

As part of its new ‘Distributed Lethality’ surface warfare doctrine, the USN in 2015 revealed plans to additionally employ the SM-6 in an offensive anti-surface warfare role. 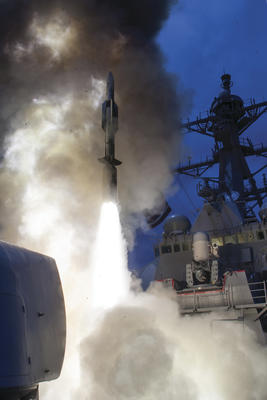 Then US Secretary of Defence Ash Carter disclosed in February 2016 that the missile’s range in the ASuW role had been increased from 250 to 370 km. Together with its Mach 3.5 speed, this represents a major advance in range and velocity, although not in warhead size, on the RAN’s in-service RGM-84 Harpoon anti-ship/anti-surface missile.

The SM-6’s new surface-to-surface mode, reportedly enabled by a software modification without any hardware changes being necessary, was successfully demonstrated against an ex-USN FFG-7 frigate in March 2016.

Nine months’ later, two ship-launched SM-6s intercepted and destroyed a medium-range ballistic missile, suggesting that their targeting capability and high-explosive warheads could also be successfully employed against the Dong-Feng 21D.

In combatting anti-ship ballistic missiles (ASBMs) such as the DF-21D and the longer-range (3,000-4,000 km) DF-26, it’s worth remembering that active defences are just one part of an equation that also focuses on severing or disrupting the many links in the ASBM ‘kill chain’.

Since only one of the RAN’s three AWDs may be available for operations at any one time due to maintenance, the multi-role flexibility offered by SM-6 would maximise the capabilities available from that ship’s 48-cell Mark 41 Vertical Launch System (VLS). The VLS cannot be reloaded at sea.

Each VLS cell can hold an individual SM-6, but a number of cells would need to be retained for the quadpacked Evolved SeaSparrow Missiles (ESSMs) that provide the AWD’s close-in protection against aircraft and anti-ship missiles.

There is, however, no known technical impediment relating to their CEAFAR2 radar and strike-length 48-cell VLS as to why the nine Future Frigates to be built under Project Sea 5000 could not also deploy SM-6 to bolster the fleet’s BMD resources.

This article first appeared in the July 2017 edition of ADM.