Navy put the word out on the street that they’re in the market for a rotary wing UAS with a strong focus on ISR. While the tender closed on April 11, it’s still worth looking at who’s in the mix.

The two most likely contenders in this market are the Northrop Grumman Firescout and the Saab Skeldar. Both are in service with the US and Spanish navies respectively; both navies have close platform and systems ties with the RAN already.

Skeldar, a medium-range UAV system, can hover for hours while providing real-time information to a control station or to remote video terminal. It is fully autonomous, commanded by high-level-commands such as “Point and Fly” and “Point and Look”, and designed for a range of land, maritime and civil applications.

The Skeldar system consists of two air vehicles and a mobile UAS Control Station. Based on operational and technical requirements, the system may be integrated into a wide variety of segments and system environments utilising a common control concept and user interface in the context of command, control and payload management.

The air vehicle is available with a number of different advanced COTS payloads for information collection and dissemination and has a dual payload capability. The architecture is open for quick integration of future payloads.

Firescout, in both its B and larger C variants, has logged more than 15,650 flight hours and over 5,800 sorties. There are two Fire Scout variants; the smaller MQ-8B has deployed on multiple frigates and is currently deployed on a Littoral Combat Ship (LCS). MQ-8B has also deployed to Afghanistan to support counter- improvised explosive device (IED) operations. The Navy has integrated a multi-mode maritime radar on MQ-8B and tested an onboard weapons capability, the Advanced Precision Kill Weapon System (APKWS). The MQ-8B Fire Scout has also demonstrated the ability to operate concurrently with other manned aircraft while operating at-sea. 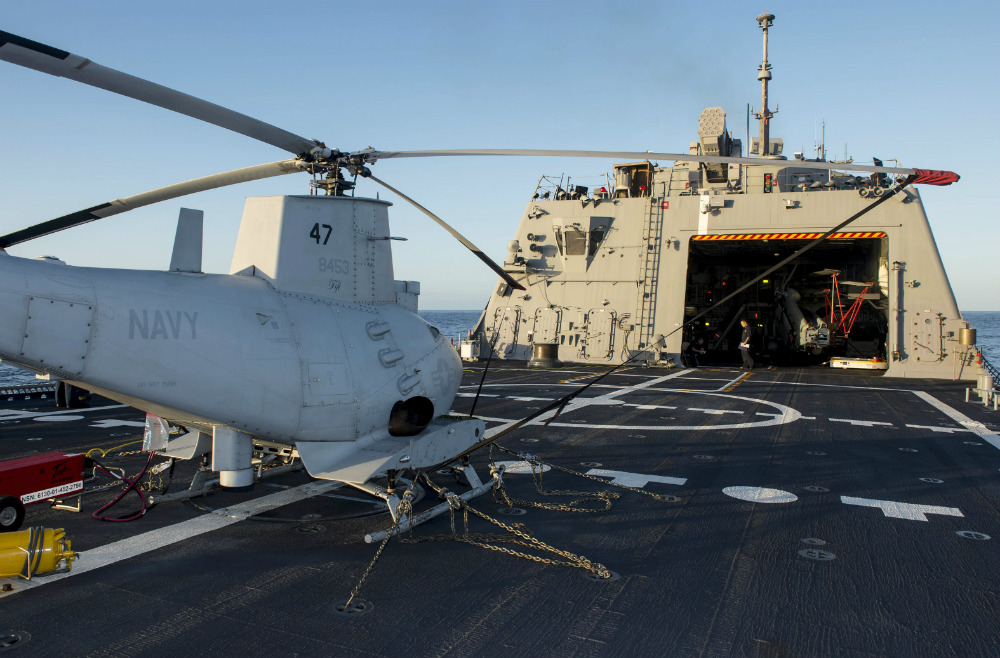 The MQ-8C Fire Scout is the Navy’s next generation unmanned helicopter. The MQ-8C Fire Scout’s airframe is based on the commercial Bell 407, a mature helicopter with more than 1,400 airframes produced and over 4 million flight hours. It also has the ability to autonomously take-off and land on any aviation-capable ship and from prepared and unprepared landing zones. This enhancement significantly increases range and endurance (more than double) and payload capacity (more than triple). The MQ-8C has completed developmental testing and is ready to deploy.

Cubic is the provider of the data link system for the MQ-8C Fire Scout, in which two Cubic Miniature Multiband Transceivers (MMT) enable simultaneous Ku Band transmissions. Cubic’s MMT is a fast, compact, software defined radio that is fully programmable and can be used with a standard, bandwidth-efficient Common Data Link (CDL), and other waveforms.

ADM Comment: Both systems have their pros and cons but the Firescout has the added advantage of running almost the same software as the Triton, already a confirmed purchase for the ADF. ADM will watch this space.