The first two EA-18G Growlers flew into the international airshow at Avalon from Naval Air Station Whidbey Island in the US via RAAF Base Amberley, marking their first appearance on Australian soil.

Defence Minister Marise Payne welcomed the arrival of the Growlers at a brief ceremony and said the aircraft was a true force-multiplier and would be a potent and technologically advanced new capability for the ADF.

“The Growler can disrupt military electronic systems, such as radars, to protect personnel and improve situational awareness,” Minister Payne said.

“Australia is the only country outside the United States flying the EA-18G Growler and its arrival is a significant leap forward in Australia’s joint electronic warfare capability and introduces a dedicated electronic attack option,” Minister Payne said.

Minister Payne today also announced that Australia will partner with the US to develop a next-generation radar and radio jammer for the Growler.

“This is a $250m investment by the Turnbull Government that will future proof the Growler’s capability,” Minister Payne said.

“As this is a rapidly evolving area we will work in partnership with the United States Navy to develop the next generation jamming capability, which will ensure that these aircraft remain at the technological forefront throughout their service life.” 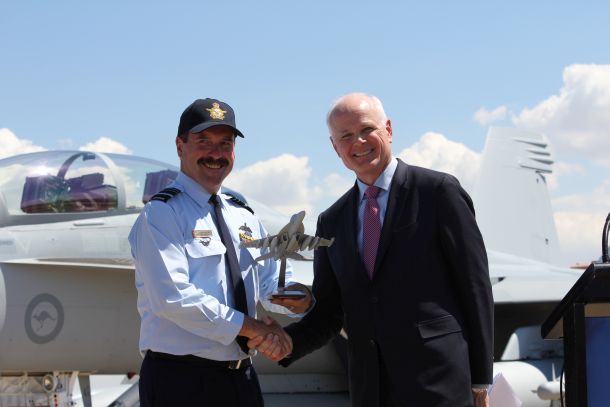 It's our job to show what this aircraft can do, not just for the Royal Australian Air Force, but also for the Army, the Navy and the ADF and that's going to be a really exciting journey.

AIRMSHL Davies listed the wide array of ADF platforms the Growler would have to work with, including the Navy's new air warfare destroyers and also the ARH Tiger armed reconnaissance helicopters in service with Army.

“I expect this aircraft to spend more time flying with the Army and the Navy than it actually does with the Air Force. He also praised CASG, which had worked hard to understand the sustainment and engineering aspects of the aircraft in order to make it effective and efficient.”

He said there would be 12 Growlers in Australia by mid-2017 forming No. 6 Squadron at RAAF Base Amberley. and this task had been a credit to Boeing and the US Navy.