More than a month after propulsion problems were first experienced with the RAN’s two 27,500-tonne Canberra-class Landing Helicopter Docks (LHDs), tests continue on irregularities within their external azimuth pods and both ships remain unavailable for service.

Chief of Navy Vice Admiral Tim Barrett and Rear-Admiral Adam Grunsell, head of maritime systems at the Department of Defence’s (DoD’s) Capability and Sustainment Group (CASG), told media that HMAS Adelaide had entered dry dock in Sydney last week and HMAS Canberra was undergoing a series of sea trials after extensive tests alongside at Fleet Base East.

VADM Barrett said metal particulate had been found in oil within Adelaide’s two propulsion pods, although not a catastrophic amount. Oils of different viscosities were also found to have mixed within the pods of both ships.

Until the Adelaide’s pods had been visually examined, it was not possible to determine the physical state of the propulsion system and bearings, he commented.

Each ship is propelled by two Siemens Navantia 11-megawatt azimuth thrusters, each with an onboard electric motor, driving 4.5 metre diameter propellors. The electricity is provided by a combined diesel and gas (CODAG) system.

“We have exhausted everything (we can do) while in the water and now we take it to the next level with one ship out of the water and one ship at sea; we will exhaust every avenue to get as much information as possible”, VADM Barrett said.

He confirmed that the RAN was in regular contact with the Spanish Armada, on whose Juan Carlos I strategic projection ship the Canberra-class design is based.

“It’s true we have operated our ship for more sea days than the Armada has for the same period – about twice, but we have operated it within the OEM-designed limits” he said. The Juan Carlos I entered service in 2010 and is not known to have experienced any propulsion issues. HMAS Canberra was commissioned in November 2014 and HMAS Adelaide in December 2015.

VADM Barrett disclosed on 28 March that a propulsion issue had been identified aboard HMAS Canberra during helicopter trials earlier in the month. “Emergent issues” had subsequently been identified on HMAS Adelaide. 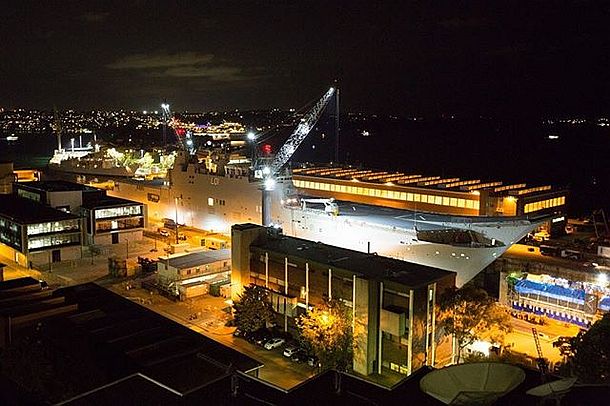 Full Operational Capability (FOC) for both LHDs was scheduled to have been achieved in the second half of 2017, subsequent to the ships’ involvement in Exercise Talisman Sabre starting late next month.

HMAS Adelaide now appears unlikely to be available for this month-long exercise while the presence of HMAS Canberra, although possible, could be subject to operational restrictions.

Should neither LHD be available, amphibious training will be conducted with HMAS Choules together with a New Zealand and three US amphibious ships that will also be participating in the exercise.

In declaring early Initial Materiel Release (IMR) for the two LHDs, Navy accepted a degree of risk, knowing full well that the Operational Test and Evaluation (T&E) phase for both could become something of a “Voyage of Discovery”.

These were the words used in the Australian National Audit Office (ANAO) report into Test And Evaluation of Major Defence Equipment Acquisitions tabled on 24 November 2015, as an example of what might occur when insufficient developmental and acceptance T&E has occurred prior to Defence granting System Acceptance.

IMR for Canberra was declared in October 2014 “with System Acceptance test procedures ongoing and many test reports not submitted for Defence’s approval”. The ship was commissioned the following month on 28 November 2015.

Of the report's three recommendations, the most applicable to the LHD situation is that prior to System Acceptance, Defence “ensures that material deficiencies and defects are identified and documented, and plans for their remediation established”.

T&E is ongoing for both vessels.