Navantia was awarded the contract to construct the ships which will replace the Navy’s current supply ships HMA Ships Success and Sirius. The new AORs are scheduled to be delivered by 2019 and 2020.

“Navantia understands the importance of meeting targets at the initial design and build stages to deliver a capability on time and on budget and that’s why the importance of cutting steel today, on schedule, is so important,” Barón concluded.

Australian industry will play a key role in the build of the AORs with a minimum $120 million of investment into Australian products, skills and expertise. As part of this, 4,500 tonnes of the steel has been sourced from BlueScope.

Navantia Australia board member and former DMO boss Warren King said Navantia’s engagement with Australian industry to build the AORs highlights the capability and capacity of local businesses which has been further demonstrated in the build of the Navantia designed Hobart Class destroyers.

“We have a world class supply chain right here in Australia – it’s a combination of the right skills, right people and right attitude – that’s something Navantia Australia has come to know over the years engaged with the Australian supply chain.”

In addition to BlueScope’s steel the AORs Integrated Platform Management System – the system that controls and monitors all the platform systems – will be built in Australia by NSAG, Navantia’s joint venture with Adelaide based SAGE Automation. 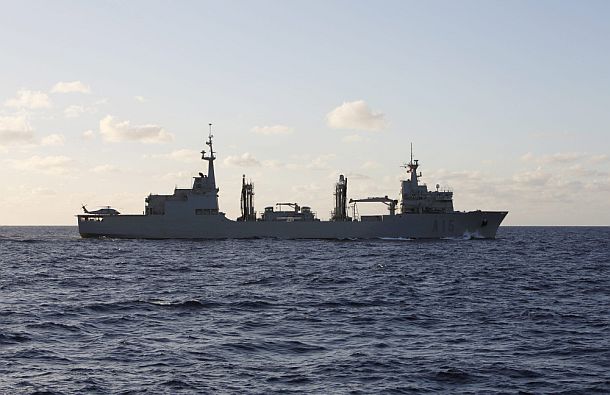 Destined to become a familiar silhouette on the horizon – Navantia’s Cantabria in service with the Armada. Credit: Defence

Navantia has full responsibility for the sustainment of both ships for their first five years of operation and is already working in the sustainment arrangements for the future ships which will imply a bigger presence in Sydney and the opening of an office in WA to support and maintain both ships.