The Navy’s two Canberra class amphibious ships will act as key ADF command nodes during operations in the maritime and the littoral environment and, as such, will need to communicate securely and effectively at many levels.

HMAS Canberra is due to achieve the Initial Operational Capability (IOC) milestone in November 2015, clearing the way for Humanitarian Aid and Disaster Relief (HADR) and Non-combatant Evacuation Operations.

Next year she will be joined in service by HMAS Adelaide and together they will continue the buildup of a high-end warfighting amphibious capability, which will be marked by the Final Operational Capability (FOC) milestone in late 2017. However when the specifications for the Canberra class LHD were drawn up in the middle of the last decade, much of the ADF’s Command and Control (C²) was carried out over voice networks – particularly so in the case of Army operations.In the decade since then, there has been a move to digital C² and today there is a great deal of focus on the transformation of the LHD communications capabilities to embrace the ‘digital fight’.

The ship will also need to provide communications for and with a range of other forces and agencies, including Special Forces, Joint Fires and Joint Effects, Air Battle Management (working with assets such as the Navy’s Air Warfare Destroyers and Air Force’s Wedgetail AEW&C platform) and other Intelligence Surveillance and Reconnaissance (ISR) assets such as UAVs.

Interoperability is also a key factor; the LHD must be capable of effective communications with allies such as the US and regional coalition partners and, during HADR or NEO operations, a range of Government agencies and Non-Government Organisations (NGOs).

Classified information (which may be from intelligence sources) has to be sent and received and then there is the reach-back into Army and Navy logistics systems, to ensure that the force is sustained and capable of persistent operations.

This not only includes an interface with the stores systems, but applications such as aviation planning and maintenance functions, where data needs to be exchanged with host systems ashore.

“You also have to plan and manage the electronic spectrum, because that’s the space in which your communications are working, and you have to then deconflict that with all the other users in the amphibious operations area,” explained Captain Stephen Hughes, Navy’s Program Manager for Amphibious and Afloat Support.

“We never have enough strategic bandwidth as we need to externally source geospatial information, rapid environmental assessment information, intelligence information, or receive high bandwidth data which could also come from remote sensors, like Global Hawk or other UAV.”

In the mid-2000s, ADF battlefield communications was very much enabled by line of sight VHF/UHF or (for long-range) HF radios and when the specifications for the LHD communications suite were first considered, nobody knew what the future digital Battlefield Management Systems (BMS) would look like.

Fortunately the inherent design of the Canberra class ships has significant growth potential, particularly in terms of internal space, fibre-optic network cabling and power generation capability and, as Army’s BMS requirements become clearer, work is underway to adapt the vessels’ networks and systems to accommodate the Army’s digital communications architecture.

“We’ve really come a long way in ten years. Army still has another three of four years of the journey to go, but we need to transition the LHD from predominantly a voice fighting capability to a digital fighting capability and we have plans in place to do that,” detailed CAPT Hughes.

“We need voice, data and video services, both in the Joint Operations Room and the Ship’s Operations Room, within the LHD. These systems are IP based networks, which have the bandwidth to provide flexibility and persistence throughout the ship and connect to headquarters ashore. We’re moving towards open standards, where there are less individual networks, but they are able to provide the same capability.

”The difference between HADR/NEO operations and high-end amphibious warfare is largely not in the complexity of systems, but rather the scale and operational tempo of them and the desired outcome of the journey from voice to digital is therefore common to both.

One of the key enablers in the transformation from voice to digital communications were studies carried out via the Rapid Prototyping, Development and Evaluation (RPDE) program.

RPDE Task No.37 considered what the optimal systems for the Joint Operations Room might be. Task 47 compared what systems were required by the Commander – Joint Task Force, CATF and CLF to provide effective operational Command, Control, Communications, Computers, and Intelligence (C4I) for full-spectrum amphibious operations by FOC in 2017, against what would be delivered by the contracted LHD platforms.Task 37 delivered its report in 2010 and the subsequent Task 47 study was undertaken over 18 months and delivered its report to Defence in October 2013, identifying the capability gaps and remediating solution options.

“What it demonstrated was that the ADF has a very robust architecture, but only for single-service outcomes and what we didn’t have was a ‘Joint’ effect of C4I to support amphibious operations,” CAPT Hughes continued.

“Some of the things we needed were secure VOIP communications, so the Commander can pick up the secure telephone and talk to Headquarters. We already had a traditional messaging system, collaborative chat on IP networks and unified communications in the ADF, so they were some really quick wins for us; we put those systems in place and we’re using them now.”

The RPDE findings were divided into those capabilities required for IOC (HADR/NEO operations) and what would be required to support high-end amphibious warfare from 2017. One of the unique outcomes from Task 47 has been the continued engagement with industry beyond the completion of the study to progressively work through the list of actions required to bridge the gap from voice to digital communications. 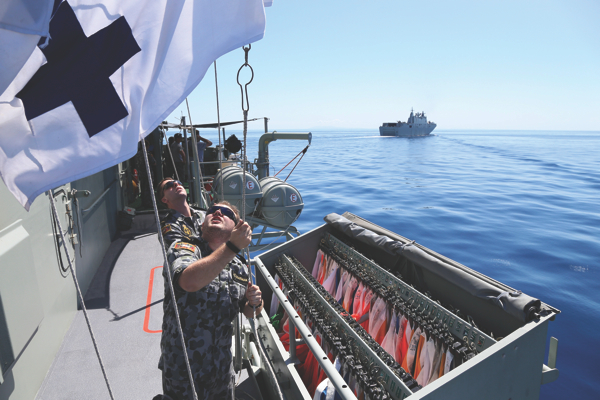 Signalmen on HMAS Stuart communicate via flag during Officer of the watch manouevres with HMAS Canberra. Credit: Defence

One of the RPDE recommendations was the establishment of an ICT land-based test site, which is being built at Fleet Base East and will integrate with the LHD Through Life Support Facility.The test site will enable the LHD ICT systems to be developed and tested ashore and importantly, it is able to connect with Army’s Land Network Integration Centre (LNIC) at Fyshwick. This enables the testing of the LHD networks in conjunction with Army’s BMS, being delivered under Land 200 Tranche 2.

The RPDE task provided Defence with a vision of the required journey to digital communications and also provided the gap analysis and recommended strategy. Now, in the implementation phase, it is helping to build the requirements and execute the plan.

CAPT Hughes says everything currently planned for integration by late 2017 has dependencies on the strategic direction of ICT being considered by CIOG, which has to be mirrored in a deployable form for amphibious operations. However, he said the biggest challenge will be to understand the Land 200 and broader operational C² requirements.

“I think that’s going to be an interesting journey, I don’t think it’s going to be technically difficult, but we will need to understand their requirements and what they need from us. Army has a vision of what they want in the Land space and it’s about how to bring it into the amphibious space, but we have an end-state we are working towards.”

To date, the program has successfully delivered capability to meet the LHD capability realisation milestones and, with a clear roadmap ahead to FOC, is on track to deliver an amphibious C4I environment under the current structure.

Beyond Land 200, CAPT Hughes noted that the next phase will be to understand the direction of C4I in the broader ADF into the future and defining the steps required to achieve the end state.

“We have a threshold to get us through to FOC, to undertake amphibious operations, but the objective beyond that will be how we fully integrate into the broader ADF,” he continued.

“But that’s a wider ADF problem of course and we’re just one element of that.”

In the meantime, LHD Communications are on track to deliver the HADR/NEO capability by the end of this year and the warfighting capability by 2017 – a milestone which will be marked by the participation of both LHDs and an amphibious force during Exercise Talisman Sabre in the middle of that year. “We are on track; it’s expensive, it’s challenging and you have to make very smart capability decisions about where to get best value for money. It’s about putting investment in the right place and at the right time,” CAPT Hughes concluded.

“With regard to the whole amphibious capability, what we’ve achieved in this year alone – from never operating an LHD in December last year, to getting to IOC in a year – has been a great success.”