Australia first obtained access to the US Wideband Global SATCOM (WGS) system in 2010, and work continues under JP 2008 to maximise the benefits to the ADF of access to this vital resource.

This will be of considerable relief to Defence, given the importance of SGS-W in maximising access to the WGS; and to prime contractor BAE Systems Australia, given the difficulties of complying with stringent US certification requirements in SGS-W construction.

"WGS requirements for satellite ground stations were unambiguously defined by the US government and rigidly enforced."

Under a cooperative agreement signed with the US Air Force in 2007 under Joint Project 2008 Phase 4, Australia became the first international participant in the WGS system, funding the sixth of 10 satellites plus associated ground infrastructure at a cost of $927 million.

The WGS arrangement gives Australia access to a proportion of the power and bandwidth across the entire constellation until 2029, providing the ADF with a global voice, data and video communications capability in the X and Ka frequency bands, both of which uniquely can be cross-banded onboard each WGS satellite.

Defence has confirmed that WGS can also be used to pass on Link 16 data, provided that this is appropriately packaged in a baseband format compatible with WGS satellite modems. 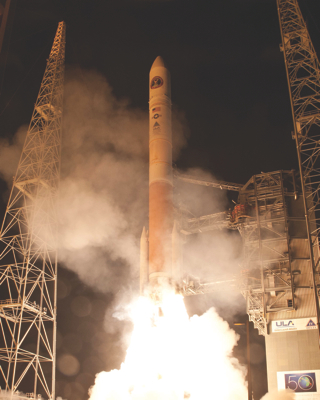 The Australian-funded satellite was launched in August 2013, and completion of SGS-W near Geraldton in Western Australia within the grounds of the Australian Signals Directorate signals interception facility at Kojarena was originally scheduled for the same month and year.

A Defence spokesperson had earlier noted that WGS requirements for satellite ground stations were unambiguously defined by the US government and rigidly enforced. This inbuilt lack of flexibility is believed to have contributed to difficulties in settling a contractual dispute between BAE Systems and the DMO.

ADM was advised by Defence in late September that the prime contractor had experienced issues early in the program with management and the flow down of requirements. Significant delay had been created by the need to remediate technical non-conformance.

Nevertheless, recent progress had been made, acceptance testing had begun, and IOC and FOC were expected in 2016 and 2017 respectively.

Access to the WGS satellites visible from mainland Australia has been provided since 2010 by interim onshore satellite anchor systems on the western and eastern seaboards and Defence has confirmed that no elements of the WGS system are dependant on the commissioning of SGS-W in order to be utilised.

While WGS will be used as a bearer for transmissions associated with the Battlespace Communications (Land) system being implemented by JP2072, the delay to WGS-W is not affecting implementation of that system since the WGS SATCOM terminal component of JP2072 has not yet been delivered.

SGS-W does however constitute the first delivery of an enduring onshore WGS anchoring capability that is likely to remain in service throughout the life of the current WGS agreement.

As such it plays a pivotal role in ADF satellite communications, providing critical communications services through the Defence-owned payload on the Optus C1 satellite launched in 2003.

Several engineering changes aimed at addressing what Defence describes as critical obsolescence and supportability issues are being progressed to remediate SGS-H performance degradation, but the system will need to be taken offline for some time for installation of the final upgrades.

The Optus C1 payload remains an important capability for Defence and whole-of-government operations to augment the wideband capability provided by the WGS constellation. Defence says the payload will continue to provide broadband (X and Ka band) and narrowband (UHF) communications services for as long as it remains operational.

Further UHF capacity – providing voice communications and low speed data for mobile forces in all terrains, using small terminals — is provided by the ADF-owned UHF payload on the Intelsat IS-22 communications satellite launched over the Indian Ocean region in March 2012.

Work continues on an upgrade to the Network Control System that was contracted two months later. Defence says delivery is expected in 2017, but has not explained why this is taking five years to complete.

Under a Memorandum of Understanding signed in 2010, the US shares Australia’s IS 22 capacity, primarily for its operations in Afghanistan, and in turn the ADF has access to US communications resources over the Pacific Ocean region.

Tenders under JP 2008 Phase 5B2 to deliver a second WGS ground station in the east of Australia closed in May this year after a series of delays in its release. The station is planned to anchor three satellites simultaneously in the X and Ka bands.

The seventh satellite in the WGS series was launched in July and provides 17 per cent more bandwidth than its predecessors. This was achieved by releasing some of the satellite’s reserve, without making any change to the satellite’s core design.

The ninth WGS satellite, to be launched in 2019, in a deal similar to that struck with the US Air Force by Australia, is funded by Canada, Denmark, Luxembourg, the Netherlands and NZ.