The tracked Puma Infantry Fighting Vehicle (I) is being offered for land 400 Phase 3 by Projekt Systems Management (PSM), a joint venture between Krauss-Maffei-Wegmann and Rheinmetall Defence established to coordinate the vehicle's development, production, and sales.

The first of 350 Pumas entered service with the German Army only last year, highlighting the modernity of a design that PSM says provides mobility and protection equivalent to that of a Leopard 2 main battle tank.

In fact, the Puma is described by PSM as ”the most modern, fully-qualified and certified high-end weapon system in today’s market”. Obsolescence management was a key driver in the 2000s design in respect of protection, firepower, electro-optic systems and C4I technologies, the company says.

The vehicle is fitted with a remote-controlled 360 degree-traversing turret equipped with a stabilised dual-feed 30mm Mauser Mk 30-2 cannon capable of firing air-bursting munitions, and a coaxial 5.56mm machinegun, although this can be substituted with a larger 7.62mm weapon. The first-shot probability is comparable to that of a Leopard 2.

A two-missile launcher for the 4,000 metre range Spike LR ATGM from Rafael is mounted on the side of the turret.
The turret is offset to the left of centre although the cannon, offset to the right of the turret, remains along the vehicle’s centreline. The coaxial machinegun is located opposite the 30mm main armament and is covered almost entirely by the armour casing. These weapons are coupled to a computerised day/night fire control system.

The commander uses a roof-mounted day/night fully-stabilised 360 degree periscope sited in the centre of the turret that allows him to locate targets and coordinate hunter/killer engagements with the gunner, who utilises a day/night sight and a laser rangefinder mounted coaxially to the main gun.

All video, including that from the 360 degree periscope and five external rear cameras in swing-mounts for protection while not in use, can be displayed and shared by the crew and embarked troops.

Twin banks of roof-mounted 76mm smoke grenade launchers form part of the soft-kill Multi-Functional Self-Protection System (MUSS), while a fully-stabilised six-shot launcher for 76mm fragmentation grenades can optionally be mounted at the back of the vehicle for close-in defence. This is operated under protection by embarked infantry or the crew.

Described by PSM as “network-enabled warfare capable”, the Puma is fitted with standardised international interfaces for voice/data communication and power supply.

The Battle Management System (BMS) is integrated into the vehicle as a separate IT system, facilitating the integration of Future Soldier Systems and a range of BMS other than the IFIS system used by the Bundeswehr.

PSM stresses that Puma is designed to play an active role as an additional ‘crew’ member when fighting alongside dismounted soldiers. This capability utilises the HMI interfaces in its integrated open knowledge information system allowing both mounted and dismounted crew members to actively collate and fuse information.Uniquely, a full-length contiguous fighting compartment contains the driver, seated to the left front of the hull, gunner and commander as well as a six-strong infantry squad – two less than the Phase 3 requirement. The design maximises protection, communications and situational awareness for the entire crew.

The compartment is air-conditioned, NBC-protected with internal radiation and chemical sensors and has a fire suppressing system which uses non-toxic agents. The engine compartment is provided with its own fire extinguishing system for additional safety.

A two-man roof hatch at the rear enables mounted troops to fight while moving. Three vision blocks on the rear right side of the vehicle, one of them in a rotary mount, and two electronic displays assist in situational awareness for the dismounts. Their access is through a powered door at the rear of the hull, hinged to open downwards and double as a ramp.

The fighting compartment’s nine cubic metres of armour-protected space provide sufficient room for the integration of alternative configurations such as command, field ambulance, and APC.

The baseline Puma weighs 31.45 tonnes, is 7.4 metres long, 3.7 metres wide when uparmoured, and turret height is 3.6 metres. When fitted with its full armour package the vehicle’s weight is increased to 41 tonnes, with a growth potential to 43 tonnes.

This package comprises a mixture of composite passive and explosive reactive armour and, according to PSM, provides the Puma with a higher level of mine and IED protection than a Leopard 2. 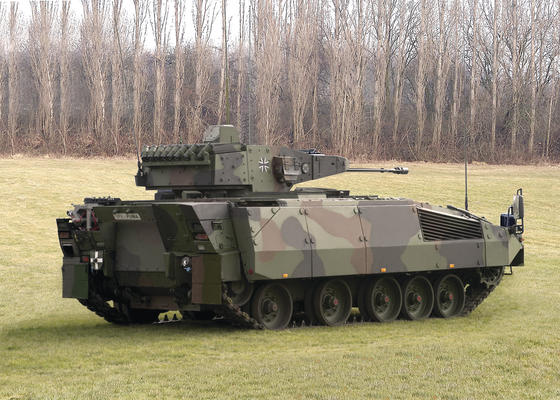 The modular nature of the AMAP (Advanced Modular Armor Protection) fourth-generation armor, made up of nano-ceramics, aluminum-titanium and steel alloys, allows it to be configured based on the threat level which will be encountered during a mission. It also enables future technology upgrades to be easily installed.

The basic armour fit is understood to provide kinetic protection from 30mm armour-piercing and explosive rounds and shaped charge projectiles in the frontal and rear arcs, and 14.7mm rounds all around. Topside armour protects against bomblets. The entire vehicle is coated with a special IR-suppressing paint which reduces its thermal signature.

When add-on armour is fitted, the Puma will reportedly withstand several hits from medium calibre projectiles (up to 40mm) and still be fully operational.

Decoupled running gear together with hydro-pneumatic suspension and lightweight tracks are designed not only for enhanced protection but also to reduce noise and vibration and thus crew/dismount fatigue.

In addition to its combat capabilities the Puma can also be operated in ‘training mode’, functioning as a realistic combat simulator for crew and unit training. Up to four vehicles can be networked in a training formation.