From the time of their arrival in the Middle East in late September 2014 to the end of December 2016, the eight aircraft attached to the Australian Air Task Group (ATG) in the Middle East flew some 3,200 combat missions totalling more than 26,000 flight hours

“After two years and four months we’re getting pretty good at this as those statistics indicate and we’re in a position to keep going for as long as the government needs us to,” ATG commander Air Commodore Philip Gordon told ADM, speaking from Al Udeid air base in Qatar.

“We are kept busy dealing with the daily challenges in what is a very complex and dynamic operational environment, staying focussed on the mission and staying abreast of the risks and opportunities. It’s a marathon not a sprint.”

“ATG aircraft are rotated back to Australia after they have used up nearly all their available hours before needing an overhaul.”

The ATG’ s aircraft and most of its 250 personnel are located at undisclosed locations in the Middle East. AIRCDRE Gordon and some specialist staff are embedded with the Combined Air Operations Centre (CAOC) at Al Udeid Air Base in Qatar, the command and control centre for coalition air power operations against Daesh.

It’s from here that AIRCDRE Gordon or a Wing Commander ‘Red Card Holder’ colleague reporting to him must provide final clearance for every bomb dropped by ATG aircraft in Iraq or Syria.

“We exercise that authority through two means, one which we call deliberate strikes – we’ve assessed the intelligence, we’ve picked a target and we provide clearance to engage that target on a planned strike that takes place in a subsequent mission,” AIRCDRE Gordon explained.

“But the way we conduct most of our strikes is through dynamic engagements; classic air support for the ground forces where we’ll be working with strike cells, basically a collection of Joint Terminal Attack Controllers (JTACs) and other coordination personnel in CAOC who are correlating and vetting the targets, deciding on the priorities, assigning the assets.

“We’re in constant communication with them to understand a situation as it’s developing. We’ve got information from the ground and live feeds from the many, many unmanned systems that are hovering over the battlespace at any one time. We can even see what the targeting pods on our Hornets are looking at and what the pilots have got in the cross-hairs.

“It’s our job as the target engagement authorities to interrogate all the information available to us and to basically run a sovereign targeting process over that to ensure we are fulfilling Australia’s obligations under the laws of armed conflict, we’re meeting our rules of engagement. Then we provide clearance which is relayed to the pilots in the cockpit before they release the weapon.”

The overall targeting process came under scrutiny in late September when coalition air assets, including two RAAF Hornets along with US, UK and Danish aircraft supported by an RAAF Wedgetail, accidentally bombed and killed about 80 Syrian troops near the town of Dayr az Zawr.

AIRCDRE Gordon said a third type of strike involved targets identified in real-time and prosecuted by the CAOC itself. These were generally well away from friendly forces and were picked up by ISR (Intelligence Surveillance Reconnaissance) assets “in the enemy’s backyard”.

“In the Dayr az Zawr strike, essentially a number of individuals had got the intelligence wrong and the investigation revealed that the CAOC didn’t have the right processes in place to adequately catch the mistakes and the mischaracterisations that were made,” AIRCDRE Gordon said. “There are now more people in that part of the combat operations division, there are also stronger operations and intelligence linkages, basically a refocusing and a strengthening of the intelligence feed into decision makers relating to that specific situation.”

With hundreds of aircraft at its disposal, the central role of the CAOC was to apportion assets to cover requirements over what was a very large battlespace, directing and then managing the execution of air operations as requirements and situations changed.

A daily Air Tasking Order (ATO) designated which aircraft from which bases were flying at what time, their target area, air-to-air refuelling arrangements, the patrol agencies with which they’d communicate, the ordnance to be carried, and the mission itself.

Differing sovereign rules of engagement were taken into account – for example, some countries might want to fly in Iraq but not Syria, and vice versa. Others might have specific targeting restrictions.

Australian tasking takes into account the announcement on 1 September last year that Canberra had authorised broader targeting by the ATG of Daesh forces, including their logistics and support organisations.

However, AIRCDRE Gordon stressed that there was no linkage between this and the Dayr az Zawr incident.

With strikes by ATG aircraft generally combined within a six to eight hour period, he and his colleague managed their shifts to align with when Australian aircraft were scheduled to fly.

Deployments by ATG personnel, nearly all of them volunteers, varied between four months and nine months depending on their role and their flexibility, but the great majority were in-theatre for four to six months. Pilots were typically away from Australia for just under five months. 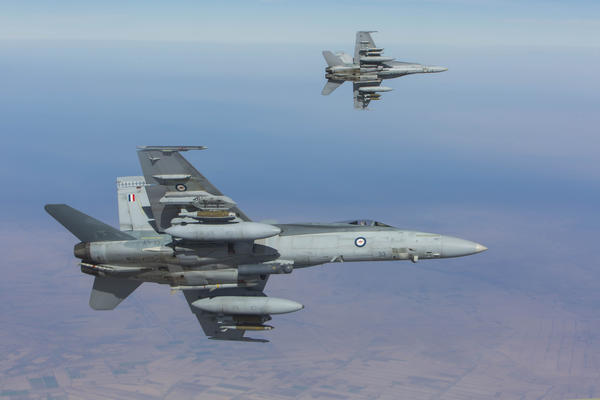 “It’s quite pleasant in January, only about 30 degrees or so during the day, but in July it’s up to 50 degrees or more, 30-40 per cent humidity, and it’s brutal.

“We’ve got our maintainers wearing ice vests to keep their core temperature down and we limit the time they can be out working on the aircraft before sending someone else out to continue with the job," AIRCDRE Gordon explained to ADM.

“Likewise with the pilots. Go out, preflight the aircraft, preflight the bombs and you’re almost spent by the time you’ve done that. Have a cold drink, put on all the combat gear, climb up the ladder into the cockpit and try and get the aircraft started and away before it overheats.”

Maintenance in the forthcoming summer heat will be facilitated by the recent completion of a 4,000 square foot tented hangar capable of accommodating a Hornet, and benefitting from 10 large air conditioners.

Routine maintenance and a little in-depth servicing is handled in-theatre by Air Force. Deeper maintenance is conducted in Australia “but if something major breaks, we fix it”.

ATG aircraft are rotated back to Australia after they have used up nearly all their available hours before needing an overhaul.

AIRCDRE Gordon praised RAAF engineers and maintainers for working out in the leadup to Operation Okra how to eventually double the hours required before a major servicing based on the type of flying undertaken and some preventative maintenance done before the aircraft left Australia.

“That means we can bring Hornets over here and leave them in theatre for about eight months. Every three months we’ll bring two fresh jets in and take two tired jets out, and we’re managing the fleet very carefully to get the most out of them before they need that deeper maintenance,” he said.

Rotating the Wedgetail and the KC-30A about every four to six months was a simpler process, since neither aircraft needed air-to-air refuelling to reach their destination.

Logistic support for the ATG is provided by Operation Accordion, which also supports Operation HighRoad, the ADF’s training mission in Afghanistan, and Operation Manitou, Australia’s contribution to maritime security in the Middle East Region.

“We buy locally where it makes sense – fuel, bottled water and food don’t come from Australia but the bombs, the spare parts, specialist equipment, that all comes from Australia; we’re not beholden to anyone else for these,” noted AIRCDRE Gordon.

A chartered sustainment flight flies in and out of Australia’s main logistics base once a week servicing the constant changeover of ADF personnel involved in the Middle East theatre, and carrying cargo.