In February this year Minister for Defence Industry Christopher Pyne revealed that a second pass decision on the $35 billion Project Sea 5000 (Future Frigates) would likely occur earlier than the originally anticipated date of 2018.

With a steel cut for the first of nine frigates scheduled for 2020, this is a worthy goal and one the three contenders would certainly welcome for what is shaping up to be an ambitious shipbuilding timeframe. ADM does understand however that ‘cutting steel’ can mean a number of things with many industry sources now planning on a 2022 program kick off.

Since August last year, those three – Italy’s Fincantieri with their European multi-mission frigate or FREMM, BAE Systems with their Global Combat Ship (GCS) and Spain’s Navantia with a redesigned F-100 – have been engaged in risk reduction design studies; this has entailed presenting ship specifications and industrialisation proposals, workforce training and a five-year support plan.

As ADM went to print, industry sources revealed that phase three of the Competitive Evaluation Process (CEP), beginning with the Request for Tender (RfT), would commence sometime in March.

The PR campaign has been in full swing, and Fincantieri have taken advantage of the fact that of the three designs, theirs is the only one in the water and in full naval service.

Italy’s Marina Militare, sponsored by Fincantieri and other Italian industry heavyweights including MBDA, Leonardo, Telespazio and Elettronica, released their new ASW FREMM Carabiniere for a lengthy tour of the Antipodes between January and early March, taking in the Australian ports of Fremantle, Adelaide, Sydney and Melbourne and engaging in exercises with the Royal Australian Navy.

ADM was fortunate to spend a short stint aboard the 6,900 tonne, fourth of class frigate as she made the transit between Sydney and Melbourne at near-full speed (27 knots), utilising her 32MW LM2500 Gas turbine in the CODLAG (COmbined Diesel Electric And Gas) configuration. 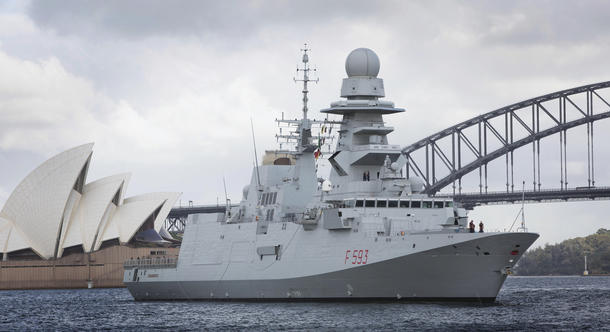 Since being commissioned in April 2015, she has been put through her paces on deployments far from her usual theatre of operations in the Mediterranean in conditions well removed from the usual Southern European climate.

Carabiniere operated as flagship of an anti-piracy taskforce off Somalia for six months in late 2015 and her current deployment had her departing La Spezia just prior to Christmas 2016; she won’t return until May.

It’s proof of her ability to operate far from her homeport, in a variety of roles, despite being optimised for ASW operations. Naturally Carabiniere had embarked extra personnel for the deployment, for example an increased medical team; while more complex surgery could not be performed, the modern communication suite enabled the Ship’s doctor to be in constant communication with the naval hospital in Rome. Similarly for combat systems crew it was possible to carry out simulated training tasks as if the ship were operating in company with other units.

Chief Engineer Lieutenant Commander Ugo Nieri said the engineering systems had performed well during the deployment, and his team was able to carry out a high degree of preventative maintenance while at sea. For maintenance tasks that required a greater level of sophistication they were able to rely on external support on the longer missions and two Isotta Fraschini engineers were embarked during the leg for planned diesel engine maintenance.

Carabiniere’s captain Commandante Francesco Pagnotta said the ship had also outperformed expectations when it came to its own noise levels, being more silent than the design specifications. With regard to machinery space noise for instance, the actual in service levels were around 85 decibels compared to the 110 decibels specified.

“From my point of view the ship outperforms the builders requirements, the diesels are housed so their noise is drastically reduced and they are also situated away from the hull,” CMDTE Pagnotta said.

In ASW silent mode operations the ship runs on two diesel engines (out of a total of four) and the close proximity of the diesels to the shafts is another factor in delivering drastically reduced noise levels. The twin rudders are also skewed at an angle, serving to stabilise the ship using dynamic control but also reducing the amount of cavitation.

CMDTE Pagnotta and ASW officer Lieutenant Fabio Schalpi were quick to point out that detection ranges in the vicinity of 20 nautical miles were normal, a four-fold improvement on performance compared to older ASW platforms, and confirmed sister ship Carlo Margottini had recently detected a German submarine operating air independent propulsion at a similar range.

During the Australian deployment the ship had conducted landing serials with an RAN MH-60R Seahawk; Carabiniere had a single SH-90 embarked and is capable of carrying two, including the larger EH-101.

Fincantieri Australia established an office in Canberra in December last year and has conducted a series of industry roadshows in February. They have also engaged former DMO (now CASG) head of Maritime Systems Rear Admiral Mark Purcell (retd) to assist their campaign.

During Carabiniere’s visit to Sydney Fincantieri’s CEO Giuseppe Bono said the company’s proven model of transferring skills and technology to local workforces and contractors would “support continuous shipbuilding and it is the one Fincantieri would seek to apply in Australia”.

Navantia hopes to capitilise on its existing relationship with the RAN and CASG, namely through its involvement in the LHD, AWD and Replenishment Ship (Project Sea 1654) programs since 2004.

It aims to refine the F-100 design used for the AWDs (similar to that used for F-105 Cristóbal Colón which arrived in country as ADM went to press) and believes it can accomplish the RAN’s requirements with minimal changes.

The joint venture it has with SAGE Automation (Navantia Sage Automation Group) is another advantage the company will leverage in its bid. The NSAG JV has created an in-country capability to provide Integrated Platform Management Systems (IPMS) for Australia and the Asia-Pacific region. The IPMS (installed in LHDs and AWDs, also planned for the two replenishment ships) integrates all of the ships systems, except the combat system, including the water treatment, fire detection, HVAC, doors and propulsion, crew control, and even Condition Based Monitoring.

The commonality and interoperability card is therefore a significant one in the hand being played by the Navantia team.

Over the years Navantia has performed a tremendous amount of work conforming the AWD design to meet with Australian regulations.

“The AWD is an Australian ship in that sense, it’s not a European design; although these might seem like minor adaptations, from an engineering perspective this is complex and important work,” Navantia Australia president, Paco Barón, said.

Navantia had undertaken 19 extensive impact studies with CEA Technologies and Saab to analyse the engineering and production aspects of the CEAFAR radar (mandated for Sea 5000), the 9LV combat system and for example, the carriage of two helicopters. Barón said this created 117 solutions because each one had different alternatives.

“We were able to list these for the Commonwealth in terms of impact; the studies have basically confirmed the AWD platform can undertake Sea 5000 requirements in a very low risk fashion with engineering work we would consider routine.”

Navantia was analysing any changes to the Commonwealth’s requirements and “was trying to stick to a philosophy of minimum change”, to quote Barón and the existing design had space and weight margins to provide for the requirements.

He didn’t foresee any change to the AWD hull design and said, “the platform as it is, even in terms of noise signature, is at a very high level of performance”.

In November 2016 the UK MoD confirmed that BAE Systems would commence cutting steel on the first of eight (originally 13) Type 26 frigates for the Royal Navy in mid-2017.

A team of BAE Systems’ Australian engineers has been deployed to the UK to join the company's established design team, enabling them to acquire the skills and knowledge required to effectively transfer the technology of the GCS for Sea 5000.

With the UK well advanced in design and manufacturing timescales for the Type 26 program, a BAE Systems spokesperson said Australia would leverage this existing design team to capture learnings to de-risk the Sea 5000 program. 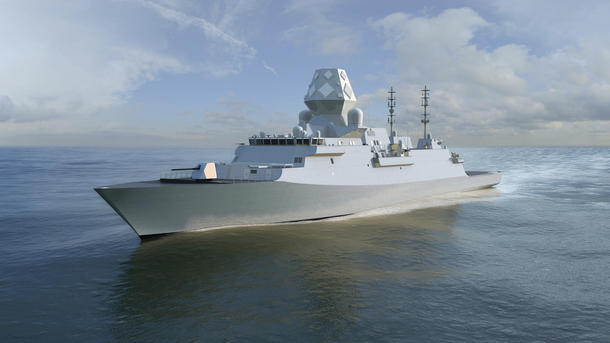 The BAE Systems Global Combat Ship (GCS) design based on the RN's Type 26 and with CEAFAR array. Credit: BAE Systems

Relevant lessons learnt from the Royal Navy’s Type 45 destroyer program, not to mention the BAE Systems-led LHD program, are being applied to the Type 26 frigate, for example heavy investment in land-based combat system test facilities. This testing has even been applied to the propulsion system, and other equipment has been derisked by initial deployment in Type 23 frigates before being accepted for the Type 26.

Of course the modelling required for the Sea 5000 program, particularly as the Commonwealth preference has shifted from a mature design to one that will require substantial modification, has required constant iteration as technologies change and alternative paths are explored.

Last year the BAE Systems installed a 3-dimensional visualisation suite to help improve understanding of the unique features of the ship design and no doubt facilitate the conversations the company would be having with the Commonwealth regarding the required design modifications.

The Type 26 has been designed from the outset to excel in ASW, with a pressing need to protect the RN’s Continuous at Sea Deterrent (Vanguard class ballistic missile submarines) and its brand new Queen Elizabeth class aircraft carriers.

“It benefits from the RN’s extensive expertise in this area of warfare, incorporating everything the RN has learned about ASW,” a BAE Systems spokesperson said.

Another factor in BAE Systems favour is the RN and RAN have historically utilised similar operational and training concepts.

“The GCS will have commonality and alignment with the RAN’s operational requirements,” the spokesperson said.