The ADF's most iconic item of uniform kit, and arguably its longest serving, the Akubra slouch hat has remained essentially unchanged since before the First World War.

The slouch hat, with its distinctive turned up left brim, has come to symbolise Australian forces and the Anzac tradition. Introduced to the Victorian Mounted Rifles in 1885 by Lieutenant Colonel Tom Price from a design used by police in Burma, the slouch hat’s brim was originally turned up at the right to avoid interfering with movement of weapons from “shoulder arms” to “order arms”, and also evidently made the “eyes right” order easier to execute cleanly by improving vision to that side.

Standardised across the army in 1903, it is still defined by the ADF simply as the HFFK, for “hat, fur, felt, khaki” and remains essentially unchanged to this day, made to the same design, by the same method. Its original wool “puggaree” hatband has given way to a cloth version including a fold for every Australian State and one for the Territories. The hat is instantly recognisable in photographs of Australian troops, whether they were taken in Palestine in WWI or in Australia yesterday. 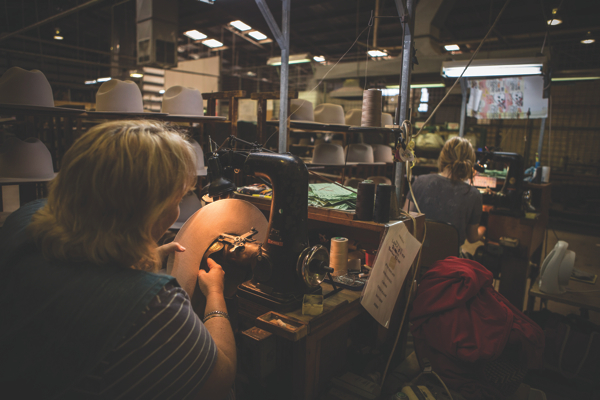 For slouch hat maker Akubra Hats, the distinctive rabbit fur-felt design and hands-on production methods have defied the digital age. The slouch hat is still made by initially spinning rabbit pelt under-fur on to a cone-shaped mould, the beginning of a labour intensive process that takes one month, 11 separate steps and as many as 80 pairs of hands to complete. All of which have resisted attempts at shortcuts or automation and have made the quintessential Australian hat hard to copy en masse overseas.

“Basically the manufacture of the slouch hat has not really changed,” Akubra Hats Chief Financial Officer Roy Wilkinson said to ADM. “Fur felt manufacturing is a very specialised field and as such makes it difficult for competitors to enter our market.”

Akubra isn’t the only Australian company to manufacture the slouch hat for the ADF, but it has supplied Australian forces across two World Wars and in to the present, producing around two million hats in the process. The Kempsey, NSW company now provides around 80 per cent of the 20,000 hats supplied each year, under a contract signed in 2012 that initially runs for five years, with four potential one-year extensions.

AIC essentialSuch is the place of the slouch hat in Australian culture that the 2012 Defence tender requirements stipulated the selected hats should have the highest possible Australian made content, on the basis that they were “a national treasure of historic value”. Akubra’s 98 per cent Australian content level helped win the work.

The Akubra company could be afforded the same iconic status as its most famous product. What is now Akubra Hats began in 1874 in Tasmania, the brainchild of immigrant English hat maker Benjamin Dunkerley, who invented a means of removing the hair tip from rabbit pelts mechanically, so that the under fur could be used in felt hat making.

By 1904 the company had moved to Sydney and enterprising English hat maker Stephen Keir joined the business, marrying Dunkerley’s daughter a year later and inheriting Dunkerley Hat Mills on the founder’s death in 1925. The Keir family owns and operates Akubra Hats to this day. The Akubra name, derived from an Aboriginal word meaning head covering, came in to being in 1912. Defence slouch hats make up only around six per cent of Akubra’s sales, while country and western styles account for more than 80 per cent. But Australia’s emotional attachment to both products is set against the need to make rational decisions when navigating a manufacturing company through the challenges of the 21st Century.

“Being now labelled an iconic company certainly adds a significant amount of pressure and expectation,” Wilkinson said. “People will naturally assume that we will always remain Australian owned and made, irrespective of the business environment we operate in today. Manufacturing in Australia is extremely difficult; cost pressures and extensive regulation and compliance compound this difficulty.

“Often we come to work and simply ‘make hats’ without fully appreciating the broader importance of our brand to Australians,” Wilkinson said. “But we certainly feel proud when we see our hats worn out in the general public, and of course commemorative events such as ANZAC day fills us with pride when we see the slouch hat worn by our servicemen and women.”