Royal Australian Navy and Japanese Maritime Self Defence Force counterparts will put to sea tomorrow for the bilateral Exercise NICHI GOU TRIDENT after initial communications systems testing and other preparations are completed in Sydney.

HMA Ships Ballarat, Adelaide and Success will also take part in the exercise along with aviation elements including Navy’s 816 Squadron’s S-70B Seahawks and the Air Force’s AP-3C Orion and Hawk 127 aircraft.

Australian and international media, including crews from China, were invited to a briefing at Fleet Base East in Sydney given by JMSDF Commander Fleet Escort Force Rear Admiral Ryo Sakai and the Australian Naval Officer directing the exercise Captain Brian Schlegel. The briefing was held with the two JMSDF destroyers serving as a backdrop but the Soryu-class submarine could not be seen.

"We are truly going to have an excellent bilateral exercise over the next couple of days - we expect a true challenge in terms of our capabilities and interoperability."

RADM Sakai said the exercise is an opportunity to develop and enhance the bilateral naval relationship by practising maritime skills and improving levels of interoperability between our two navies. This would be the first opportunity to conduct the exercise off Sydney.

In repsonse to questions regarding the Soryu's trip and ability to cope with the long range transit, RADM Sakai said regardless of whether long or short distance ranges were needed, the Soryu could cope depending on how it was operated.

"The submarine can reach Hawaii without the need to refuel," he said.

When pressed on whether the presence of the Soryu was part of a sales pitch by the Japanese Government, he said he was simply a "surface warship driver" and was therefore not qualified to respond to such assertions. 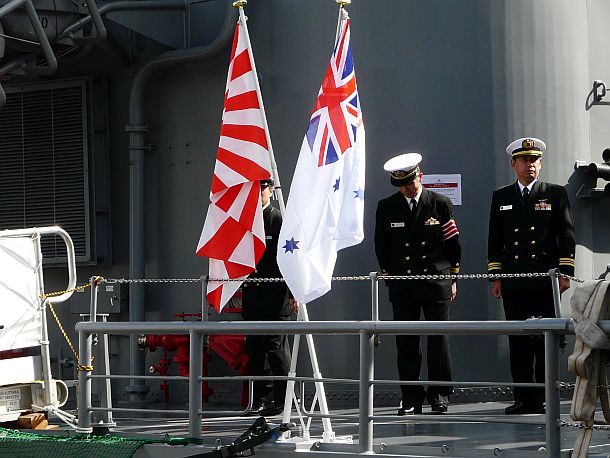 CAPT Schlegel stressed the exercise was not the first of its kind, with NICHI GOU TRIDENT having been conducted between Australia and Japan since 2009. He did acknowledge the historical significance of the first visit of a Japanese submarine to Sydney Harbour since that fateful night in 1941 during World War II.

In response to questions from ADM on the specific nature of the excercise, CAPT Schlegel said the exercise was indeed bonafide, with a lot of effort and planning having taken place to make the most of the presence of the submarine. Complex anti-submarine warfare CASEX serials were planned involving both surface units and air assets and of course the Hakuryu.

"The fact that the Japanese have come here and brought a submarine with them means that we are truly going to have an excellent bilateral exercise over the next couple of days - we expect a true challenge in terms of our capabilities and interoperability."

"As part of the exercise HMAS Adelaide will attempt a breakout of Jervis Bay in company with surface units and her escorts and accompanying air assets such as the AP-3C will be seeking to locate the Soryu before she can take up a firing position on the LHD," CAPT Schlegel said.

The previous NICHI GOU TRIDENT was last held in Japan in October 2015 and the current exercise is expected to conclude on the 26 April.