Twelve Offshore Patrol Vessels (OPVs) will be built initially in Adelaide until first steel is cut for the future frigates, also pre-determined for that city. Up to 21 Pacific Patrol Boats will be built by Austal in Henderson, WA.

The three projects represent near $40 billion worth of investment, according to the Government.

The Government has given First pass approval for the OPVs under Sea 1180, with construction to begin in Adelaide from 2018, following the completion of the Air Warfare Destroyers and transfer to WA when the Future Frigate construction begins in Adelaide in 2020. This approach is seen as an attempt to ensure that jobs and skills are retained in Adelaide.

As part of the Competitive Evaluation Process (CEP) three designers have been shortlisted; Damen of the Netherlands, Fassmer of Germany, and Lürssen of Germany to refine their designs. This program is estimated to be worth more than $3 billion.

First pass approval for the Future Frigates under Sea 5000 has also been granted. Three designers – BAE Systems with the Type 26 Frigate; Fincantieri with the FREMM Frigate, and Navantia with a redesigned F100 – have been short-listed to refine their designs. The frigates will all be built in Adelaide, incorporating the Australian-developed CEA Phased-Array Radar. The designers who have missed out are the German Blohm & Voss with their Type 125 Stabilisation frigate and the French DCNS with their version of the FREMM.

Chairman TKMS Australia Dr John White was pleased with the inclusion of the Fassmer designed vessel on the Sea 3036 OPV shortlist, with TKMS Australia intending to act as prime contractor for that bid.

"It's a vessel that has been exported and built in a number of countries and given TKMS's presence in Australia, Fassmer are keen for us to support them in making their design available and we are happy to do that."

With regard to the F125 Stabilisation frigate missing out on pre-selection, White said TKMS accepted the Government had made a detailed analysis of the designs available, and they would have to accept the choice.

DCNS Australia told ADM they were awaiting further announcements and had no comment at this time.

The CEP is on schedule to return second pass approval in 2018, which will allow for construction to commence in Adelaide in 2020. This program is estimated to be worth more than $35 billion.

Subject to negotiations, this program is estimated to be worth more than $500 million. Austal proposes to conduct support of the replacement Pacific Patrol Boats including deep maintenance from Cairns, Queensland. In total, through-life support and sustainment (including deep maintenance) for the Pacific Patrol Boats is valued at a further $400 million over the life of the boats. 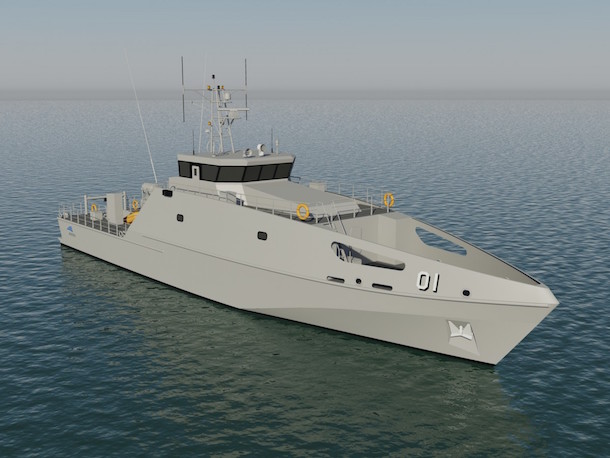 Austal said it will work now with the Commonwealth to complete documentation and finalise the contract over the coming weeks. Full details would be provided to the market when the contract is finalised.

“The BAE Systems Type 26 Global Combat Ship is already in an advanced stage of design, is well aligned with the timeline required for the Future Frigates and would be an outstanding General Purpose and Anti-Submarine Warfare (ASW) Frigate for the Royal Australian Navy.

“If we are chosen as the successful tenderer, Australia will be able to exploit BAE Systems design process, an operational design team and leverage the maturity of the Global Combat Ship design to ensure that the program is de-risked from a technical and economic perspective.

“We believe that South Australia will be able to put in place the right infrastructure and workforce to allow construction of the Future Frigates in 2020 as per the Government’s timeline, and we look forward to engaging with the Australian supply chain to ensure it plays a significant role in this program.

“As one of Australia’s leading shipbuilders we will also look to work closely with those designers short-listed for SEA 1180 to determine how we can support the Royal Australian Navy as part of that program.”

Australian shipbuilder and submarine maintainer ASC today welcomed the Federal Government’s announcement that the build for 12 Offshore Patrol Vessels (OPVs) would commence in South Australia from 2018.

Adelaide based ship and submarine builder made the following comment:

“ASC welcomes today’s future shipbuilding announcement and is ready, willing and able to commence the build for the OPVs from 2018, utilising its highly skilled workforce and world class facilities at its Osborne shipyard.”

“As lead shipbuilder for the Air Warfare Destroyer project, ASC has made significant productivity improvements over the past two years. ASC looks forward to continued improvement on the vital AWD project and stands ready to respond to the Government’s future shipbuilding requirements.”

ADM is seeking comment from the other announced tenderers and will report more on this story as news comes to hand.