The contract will see a new version of the radar, known as the CEAFAR2-L, fitted to the class. This contract is part of the larger program, the Mid-Life Capability Assurance Program (AMCAP) that will modify the ships and integrate the radars that has a total value of over $400 million. HMAS Arunta will be the first of the class to incorporate the full scope of the AMCAP upgrades.

The AMCAP scope of work includes replacement under Project Sea 1448-4B of the Raytheon SPS-49(V)8 ANZ long range air search radar with a more capable unit developed from the CEAFAR active phased array radar installed on the ANZACs as part of their ASMD upgrade.

The Commonwealth signed a standing offer for phased array radar development services with CEA Technologies in October 2013. Under this arrangement the company had progressed risk reduction and demonstration of the CEAFAR2 high power phased array radar (PAR) concept demonstrator in the S, X, and L bands. The radar will also be considered for the Future Frigate Sea 5000 project, under which the inclusion of a CEAFAR radar has been mandated by the Commonwealth. 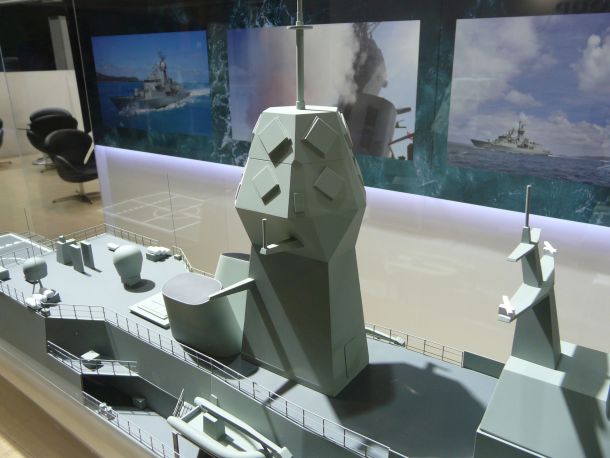 The CEAFAR2-L as it will appear on the Anzac class following the AMCAP upgrade. Credit: ADM Patrick Durrant

The CEAFAR2-L is a long range active electronically steered array (AESA) that provides high quality tracking in the L-band. It includes an integrated, all mode, Identification Friend or Foe (IFF) capability. The new version marks the transition to gallium nitride (GaN) technology which will deliver much higher power but with half the weight and thickness of the previous generation technology used in CEAFAR1.