The Australasian Simulation Congress 2017 (ASC2017) is well underway in Sydney, once again bringing the SimTecT, SimHealth and Serious Games streams together under a theme of ‘People Energising Innovation’.

This year's event featured an inaugural SimYouth program to introduce high school students with an interest in STEM to the rapidly developing field of simulation. NASA astronaut Dr Michael Gernhardt, who was also a keynote speaker at the congress, addressed the group on Tuesday.

Noetic Group sponsored the program and its principle John Smith said students would have the opportunity to engage with cutting-edge simulation technologies, world class innovators and industry experts.

“We really want to change the demographic of the simulation space, opening this area up to younger people,” he said.

ADM attended some of the plenary sessions on Wednesday where Darren Manser, director Air Force Ranges talked about Plan Jericho and the role of LVC in developing a 5th Generation Air Force.

“While we've had various versions of the present directorate in the past, this is really an opportunity for Army to have a single point of contact when it comes to simulation – it fits in with our modus operandi which is centralised control with decentralised execution.”

COL Norris has been busy defining the current land simulation capability prior to formulating the development paths into the future.

“The Army Simulation Manual has been drafted and will be an effective tool for engaging with industry – we thought if we could get industry to understand what our capability is then obviously that starts the conversations on developing solutions for the future.” 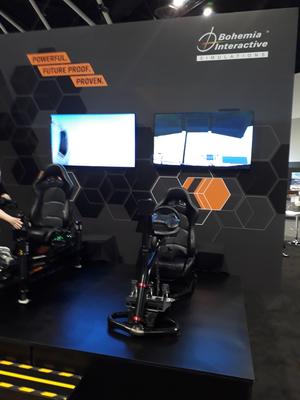 COL Norris added Army realised it needed to do a better job of bringing simulation into new capabilities.

“I think in the past we've been a little guilty of bringing simulation capabilties in at the end of the acquisition phase which is the wrong way around.”

In drafting the manual, he said the directorate has considered  the capability lifecycle and determined where simulation should be implemented along that path, from the strategy and concepts phase all the way through to acquisition and then the eventual disposal of a capability.

In terms of defence exhibitors there was a good showing of both primes and SMEs at the event; the former included CAE Defence, BAE Systems, Northrop Grumman, Rockwell Collins, Cubic and Elbit Systems; some of those representing the latter were Calytrix, DXC Technology, Bohemia Interactive and ImmersaView.

The BAE Systems booth had an immersive VR walkaround on their Land 400 Phase 2 contender the AMV35; your correspondent had some fun getting stuck into the CRV's toolbox and engaging targets from the gunner's station. Also featured was a periscope trainer and a demonstration of a design review of a ships' engineering model in VR using Prospect Pro.

Northrop Grumman was displaying their suite of tools and services that have been developed to better facilitate LVC training across disparate systems.  As manager (Communications Programs) Stu Blackwell explained, NG operates over 70 sites worldwide for the USAF's distributed mission training.

“We provide the glue for the network, regardless of the make of the simulator, we can use this tool to measure what comes out of the back of the simulator to standardise it.”

The advantage of a standardised environment, Blackwell explained, is that integration only needs to be performed once after all participants have complied with the standard.

“For the ADF, with JP 9711 (Core Simulation Capability) you're going to have joint and coalition training at varying levels of capability – what's needed is a strong cross domain solution policy that allows you to filter what participants will see.”

For more on the event, please keep an eye out for our story in the forthcoming October edition of ADM.